This week, CHML’s Scott Thompson wanted to know what the hell I was doing down in Las Vegas. Told him I was here to interview the main dudes behind Pawn Stars, including the one and only Chumlee (right, eagerly taking the keys to my ’97 Lumina for 90 days plus interest).
Chumlee, pawn shop owner Rick Harrison, his son Corey (“Big Hoss”) and the “Old Man” have basically won the lottery, with History Television reaping big ratings from the red hot series.
They were all here at the Cosmopolitan Hotel for international press interviews today. I was with a posse of press cats from Central and South America. Hola! Rick and Corey were pretty straight ahead when talking about this crazy fame ride they are on (including face time on Leno and Letterman), but Chumlee seems to already be in Snooki land. Hidden behind a massive pair of Cito Gaston shades, working the too small hat and bling, the dude says he’s never been to a Vegas show ever. All of them have personal assistants now to run out to the beer store and stuff. It’s a bitch, says Chumlee, but otherwise it is four hours in line talking to every Tom, Dick or Harry.

Chumlee, by the way, got his nick name from a family friend who was a fan of the old, poorly-animated Tennessee Tuxedo Saturday morning cartoons from the mid-’60s (from the same folks who did Underdog). Don Adams voiced Tennessee, a zoo penguin. Chumlee, who at 29 is way too young to know anything about this boomer TV ‘toon, finally caught up with the cartoon on YouTube and was dismayed to find that Tennessee’s pal was a dopey, Walrus sidekick.
Still, Vegas’ Chumlee is laughing all the way to the bank. The T-shirts are selling like crazy.
Scott had other general questions about Vegas and pawn shops. You can listen  in here. 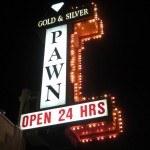 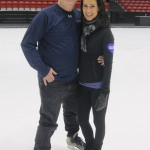