You know you’re at a TIFF/Canadian Film Centre event when somebody shouts out “Noah!” and about 30 people turn around.

Sunday was the annual CFC BBQ in Toronto on the lush lawns at the old E.P. Taylor estate and the weather could not have been nicer. Thanks to my well preserved Saab 95, I finally felt I had wheels pretentious enough to park beside all the Audis, Benz’ and BMWs. 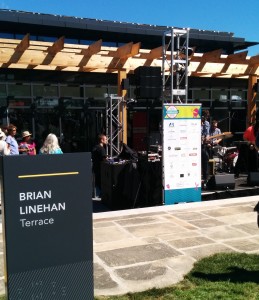 My old pal Slawko Klymkiw got to show off the Centre’s newest structure, the gorgeous glass and stone Northern Dancer Pavilion. The roomy event space provides a much needed indoor auditorium venue for the CFC. I’d even go so far to say it was a perfect size for a future TV on Film Project screening.

I was particularly cheered to see the well manicured space in front of the pavilion designated the Brian Linehan Terrace. Linehan is missed every year TIFF rolls around and this thriving centre of learning and development is an apt spot to salute his memory.

There were a few speeches from politicians. The CFC currently enjoys a $9 million boost from the province of Ontario. That and donations from many folks in the industry, both at home and in Hollywood, helped make the pavilion a reality.

The great Norman Jewison, who powered the CFC into being way back when the party took place out at his ranch, is still the big draw at the podium. Jewison talked about how famed Canadian-bred Kentucky Derby winner Norther Dancer used to frolic on these fields where he commanded a huge stud fee for siring generations of thoroughbreds. The stud fees today are paid by students looking to gallop into the film and TV business. The director also pointed out that Queen Elizabeth once slept upstairs at the estate. The Queen loved the ponies was Jewison’s point, quickly trotting past any inkling that Phillip or one of the randy new Royals was more about siring than Sire.

Jewison then got downright passionate, exclaiming that the day belonged to the future generation of filmmakers and television creators. “It’s about talent, actors, writers, directors, producers, editors,” he said. “It’s about the creative force that will bring out stories to the screens of the world–and we’ve got a lot of stories to tell.”

The place was packed, and that meant a crazy long a long line up for burgers. The smart folks skipped the jam packed burger hand out and grabbed hot dogs, pizza and tacos at empty stations tucked in corners along the fringe. The BBQ is really a metaphor for the Canadian film and TV biz; it looks impossible, but if you’re hungry and resourceful enough, you’ll find a way.

It was cool to see TIFF headliner Bill Murray cutting up at the BBQ, doling out nuggies to anybody in a jacket and tie. Wait–that was my old pal Art Hindle. Every selfie he takes is a work of Art. 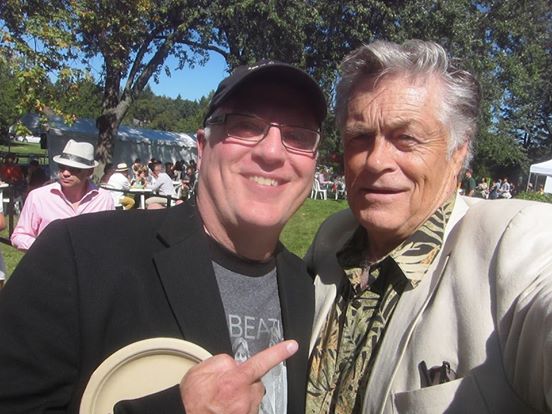 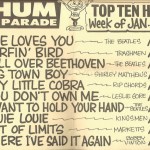 Littler is big about his early Beatles review 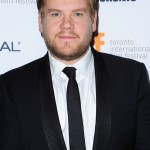