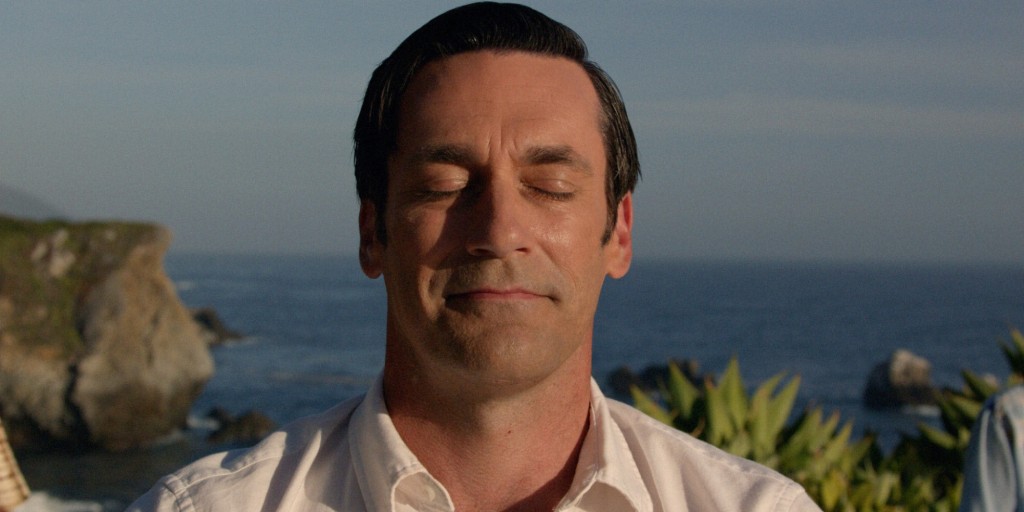 Mad Men has often been accused of being slow, so I thought I would take my time before weighing in on the final episode.

Actually I just saw it Friday night. Was up north the Sunday it aired and my neighbour has rigged his dish just to get hockey games. Had it in my PVR and took my time watching it. Managed to duck spoilers galore on Twitter and Facebook for days.

There are SPOILERS here, so if you haven’t seen the final and plan on doing so, please stop reading (if you’re still reading).

Now, creator and executive producer Matthew Weiner did tell us that each of the final seven episodes contained wrap-it-up moments. Different characters made their exits in different weeks. Some of us felt there were too many new and minor character introduced as the series drew to a close but whatever. Most of us just wanted to know what would happen to Don and Peggy, Roger and Joan, Pete and maybe Betty.

Don Draper (Jon Hamm) obviously was the biggie. He’s the beginning, middle and end of Mad Men. In the last few weeks, he walked out of a meeting with McCann Erickson, split for the coast and seemingly dropped out. It’s an edgy, uneasy decline. One week we think he’ll be murdered by hitch hikers, the next killed in a high speed crash, or beaten by hillbilly thugs. Don just seems to be throwing his life away.

So, in the final moments, as the camera zoomed in on him meditating on a hillside with strangers, I thought to myself, please, no, do not let this series end like this.

Then Weiner throws his last curve ball. The entire run of Mad Men has been a deliberate, slow motion study of men and women of the mid-20th century. The only time the series shifts into turbo is with 60 seconds left. Cut from Don, eyes closed and smiling, to the greatest TV ad of the ’70s: the iconic Coca-Cola “I’d Like to Teach the World to Sing” Hillside spot.

Now, I got it and loved it. I was there, saw the ad when I was a lad and remember it washing over viewers like a warm, sunny day at the beach. It was the ultimate hippie plea for international harmony, set to irresistible music, and it made everyone thirsty for Coke–Pepsi generation be damned.

So Don came back from the brink to deliver the greatest TV ad of all time. Draper goes out with a grand slam home run, set up by weeks of selfish behaviour, unease and creepy foreboding. Don, as that adorable knucklehead Meredith guessed, is in a better place.

My second though, however, was will my daughter get this? Katie is 25, works in marketing as a graphic designer and is a huge Mad Men fan. But unless you were Matthew Weiner’s age (50) or older, will that Coke ad resonate enough for you to get the end of this series?

I checked with Katie, and as I suspected, there was a big “Whaaa?” from her peer group over that ending. Being a child raised on classic TV she kinda got that ad was real and meant something, but she had to go look it up and put two-and-two together later. The ending had a delayed reaction, and even then a less satisfying one (although she still enjoyed the ending).

Now, I’m okay with Weiner taking the narrower path. Too often a punch line is watered down when the payoff has been rendered generic or blandly made to appeal to the widest possible demographic. I still think, however, that the end of Mad Men will always have an asterisk: * works best for viewers born around the time the series was originally set.

I could nit pick the fate of the other characters to pieces, but it is a week later, and what difference does it make? Certainly somebody had to take a hit for cigarettes and Betty was a walking chimney. Sally as the the most sane and sensible adult at the end? Of course. Joan as a crusading production boss? I can see it, but dependable Bruce Greenwood got reduced to a plot devise pretty damn fast. Pete and Alison happy at last? Good on them. Peggy and the bearded guy? Wow, that seemed so, “Hey, hurry up, we’ve only got four minutes to deliver the script.” Roger and Megan’s mom? Zut alors. Why not, and I’m glad Weiner planted all those heart attack scares just to goose a happier ending.

The episode, written and directed by Weiner, was titled “Person to Person.” There’s an essay just in that, but I thought Don’s desperate phone calls to the three women that meant the most to him–Peggy, Sally and Betty–was the dramatic high point of the finale.

For far more insight into how it all ended, go to the best: Tim Goodman at the Hollywood Reporter, Mo Ryan at the Huffington Post and Alan Sepinwall at HitFix.com. 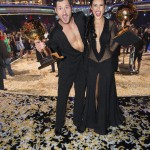 Meanwhile, back on Dancing with the Stars… 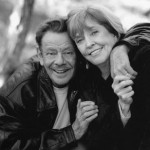