That privilege comes with a “do not report” rider. CBS’s PR department and The Late Show insist press guests put away their notepads for a night and just enjoy the show. What a wonderful condition, I wish it was imposed more often.

What I can say is that it was a thrill to be in the Ed Sullivan Theater. I saw Letterman live many years ago but during his Late Night NBC run at 30 Rock. So being in this Broadway theatre–home to so many historic TV moments–is about as close to the Holy Land as a TV scribe can get.

I can also now write about Monday’s episode of Colbert because everybody has seen it. It was all dedicated to the people of France in the wake of the senseless attacks in Paris. Bandleader Jon Batiste and Stay Human opened the show with the The Marseillaise as the studio was bathed in blanc, bleu rouge.

Colbert then packed the show with interesting guests, including Medal of Freedom recipient Capt. Florent Groberg and Obama “Hope” poster artist Shepard Fairey. Colbert opened the show with a military expert with a provocative take on what needs to be done to secure peace in Syria and wipe out terrorism.

In just a few months, Colbert seems to have found his feet at The Late Show, cramming a seated, swift monologue in Colbert Report-style and blasting into issues with the kind of glee Jimmy Fallon saves for lip-syncing with celebrities. (Colbert put the kid gloves back on Tuesday as frail, elderly Burt Reynolds braved Hi-Def cameras for a long overdue visit.)

There was a dumb cat act at the end which was the perfect disaster, allowing Colbert to have the kind of fun when things go wrong that Johnny Carson and David Letterman both aced.

The real fireworks occurred in the middle of the show when Bill Maher too his seat next to Colbert. It was awkward, tense, edgy, uncomfortable–everything you want in a talk show. Maher and Colbert–two guys from opposite ends of the Catholic experience in America today–make a living knowing exactly where they stand. They could tour with this snarky act for years, milking the kind of feud Jack Benny and Fred Allen exploited on the radio. Check out the video above of the full interview (what aired was slightly edited) and witness Colbert hit a turning point in his development as an elbows up, in command 11:35 talk show host. 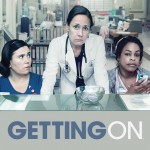 HBO’s Getting On is going out feet first 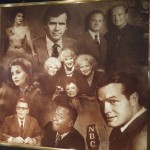