Like a time traveling series searching for the right worm hole, Star Trek: Discovery is finally back for a third season. I’ve seen the first episode, and damn if it doesn’t boldly go.

Now, as mentioned here before, I’m not a traditional Star Trek fan. I therefore do not have the usual “prime directive” violation criticism or the Starfleet/Doctor Who “Space Time Continuum” objections because I really don’t know the rules.

I do know a bit about action and compelling storyline and character, however, and this third season premiere is packed with all of that. To me the new season is more “Star Wars” than Star Trek — perhaps why I like it a lot.

We’re even introduced to a new Hans Solo, although I’m getting ahead of myself. When we last left Commander Michael Burnham (Sonequa Martin-Green) she was blasting off into the future like a giant astro-moth on a mission to skip to the future and save the Federation. There she is, zipping through space, without a starship, when she collides with a new model Imperial Falcon rig pilotted by a very Hans Solo-ish character named Cleveland “Book” Booker (David Ajala) — although we don’t learn his name right away.

The collision forces both of them to crash land on a mysterous, but Earth-like planet. (These scenes were all shot in Iceland). Burnham’s survival without a ship seems impossible (even Iron Man would have suffered some severe dents) but, really, if you bail here, you might as well never watch this type of sci-fi series.

She meets up with Booker and he’s not happy. There are plenty of brilliant fight scenes throughout and kudos to the actors and their stunt doubles.

Eventually, Booker, who is hauling stolen cargo, calms down. He slowly realizes that Burnham is some sort of 1000-year-old Rocket Lady. After mocking her “antiques” (her weapons and communicator) he leads her to a market in search of the crystals he needs to blast his ship and its cargo off this planet.

I don’t want to spoil the fun and give too much away, but it seems as if Discovery‘s revolving door of executive producers saw how fast Disney+’s The Mandalorian became thee hottest series in streaming and decided to amp up the comic book energy. There is no baby Yoda, but there is a very large kitty kat named Grudge (only Booker can carry it) and even a giant, slimy, man-gobbling worm critter named Sticky who clings to Booker’s ship and dutifully spits out lady’s from centuries past.

One thing Burnham learns is that the universe went through a big change in the last 930 years. There was something called “The Burn” in which, we are told, “the galaxy took a hard left.” Sort of like this series, but I like the direction.

There’s also a scene where Burnham gets high. Was this ever overdue! This no-nonsense commander needed to get a little wasted. To see Martin-Green embrace her character’s stoner side boldly takes the mickey out of decades of fun-challenged, Star Trek sobriety.

The new episode was also filled with state-of-the-art special effects. Desks and beds and everything else just materializes at will in the 3000+’s. The soaring score from Jeff Russo — some of it orchestrated and performed in isolation during the COVID pandemic — adds to the impressive, cinematic experience. The opening title sequence is pretty cool, too, with bold hints of past Star Trek glories in the altered theme.

Fans of Discovery looking to welcome Doug Jones back as Saru or Anthony Rapp as Paul Stamets, along with Mary Wiseman as Sylvia or Wilson Cruz as Hugh Culber, will have to wait a week. Episode one is a sensational solo effort by Martin-Green, but the gang will get back together in subsequent episodes.

There are also a few moments where, as is the franchise’s tradition, the future is used to comment on the present. At one point there is mention of “the endangered species act,” which had an Obamacare ring. Burnham, of course, is on a solo mission here, isolated from her friends, on the ultimate, socially distanced journey.

In the meantime, the chemistry between Martin-Green and newcomer Ajala (he played Manchester Black in Supergirl) is sexy and palatable. Burnham didn’t just blast into the future, she’s met her Hans Solo. Star Trek: Discovery is back, baby, and giddyup to the new season. 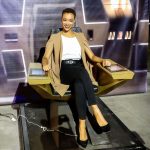 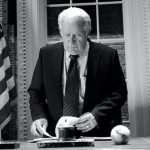