Eric McCormack’s drama Perception came back strong in its third season debut. It scored  3.1 million viewers June 17 on TNT and picked up an overnight, estimated 123,000 the same night in Canada on Bravo. That was for a well-hyped season premiere shot in Paris. This Tuesday at 10, McCormack’s neuroscience professor character, Dr. Daniel 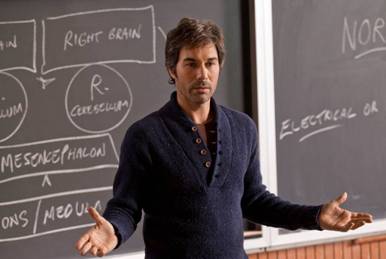 “I was pushing for something Rock ‘n’ Roll ,”says McCormack of his shaggy professor look on his new series Perception Eric McCormack stars as a college professor who helps solve crimes in Perception (premiering Wednesday night at 9 p.m. on Bravo).The Toronto native was back in his hometown last week when I interviewed him for a