Friday was the 50th anniversary of the debut of The Twilight Zone. It was never a big hit but ran for 156 episodes and stands as one of the smartest and creepiest TV anthologies ever. It certainly give me the willies as a lad.
It was also a proving ground not just for promising on-screen talent–Robert Redford, Charles Bronson, William Shatner, Billy Mumy, Burgess Meredith, Dick York and Lee Marvin all headlined memorable episodes–but for bringing great genre writers such as Charles Beaumont and Earl Hammer, Jr., to television.

The series ran from 1959-1964. Original network CBS ignored the Oct. 2 anniversary but, as usual, David Bianculli is on top of it over at TV Worth Watching. He asked several of us who contribute to TVWW for our Twilight Zone memories. Read all the submissions here. Below is the one I contributed, a bit of a cheat because it is really about the CBS remake of the classic Rod Serling series, the one that ran in the mid-`80s:

My most vivid Twilight Zone memory was almost worthy of a Rod Serling script. On that signpost straight ahead could have been written: “Warning: Clueless journalist.”
It occurred in the mid-‘80s, when CBS tried to revive the series. It was an uneven revival, featuring scripts from writers like Stephen King, Arthur C. Clark and an aborted attempt by Harlan Ellison. Bruce Willis and Morgan Freeman got a little face time on the revival; one episode featuring Sid Caesar as a past-his-prime magician stands out in my memory.
I was living in LA at the time, and as a photo editor and writer was just starting to get into this racket for TV Guide Canada.
A photographer I knew back then introduced me to her boyfriend, an amiable Texan who knew this guy who was re-doing the music for the series. He figured he could get him on the phone if I wanted to interview the dude. Why not, I thought, looking to fill space in the TV magazine’s front page “Grapevine” column.
The call came through, and we talked about staying true to the original melody, so closely identified with the old black and white series. This guy was a guitarist, and said he tried to add a bit of a rock edge to the iconic theme. He was a pleasant gent on the phone and seemed happy to talk about being pulled into the Twilight Zone.
It wasn’t until I sent the short piece back to the office in Toronto that an editor asked if I knew who the hell I had just interviewed. It was a name I was not at the time that familiar with. It lay somewhere between the pit of man`s fears and the summit of his knowledge. Submitted for your approval: Jerry Garcia of The Grateful Dead, a rock icon now found only in…The Twilight Zone.

Video Review No. 4: The National Parks 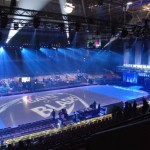 Battle of the Blades: The View From The Golds