The above teaser for this year’s Super Bowl XLVI Volkswagen ad had reached over 11 million YouTube views at the time of this posting. It’s easy to see why. It’s one of those brilliantly simple, “you gotta see this,” ideas that can help but go viral.
Last Super Bowl, Volkswagen scored a touchdown with their Darth Vader kid ad. That cute and clever Passat spot has been streamed over 50 million times. Add the estimated 100 million Super Bowl viewers and you can see why NBC was able to sell out this year’s game at $3.5 million+ per 30 second spot.
Once again, Canadians are stuck watching the same lame-O ads CTV will mix in with their eleventy-billion promo spots for mid-season pickups Smash, The Voice and The River. Fortunately, you can do an end run around those five dollar foot long spots here by following this link to The Daily Beast, where you’ll find 10 more links to Sunday’s most anticipated ads.
A few were the result of “Best Super Bowl ad idea” contests, including this funny spot for Chevy and another one for Doritos. Others feature David Beckham, John Stamos and the already posted Matthew Broderick “Ferris Bueller” spoof for Honda (8,950,000 views and counting three days before kickoff).
YouTube also has a 10-second teaser for the Marvel’s The Avengers movie ad running during the game. Yes, 10 second teasers now hype 30- and 60-second commercials.
The force is with Volkswagen in their real ad for this year’s Super Bowl, titled “The Dog Strikes Back.” Watch a slightly extended version of the Game Day goodie here.
UPDATE: Of course, William Shatner’s Priceline.com negotiator will get into the act, with a spot airing during the Super Bowl pre-show. The script calls for the character–played these past 14 years by the 80-year-old actor–to  be killed off. This doesn’t sit well with Shatner, as you can see here in this “Making Of” trailer to the eventual ad. 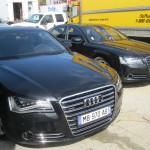