Hockey obsessed? Michael J. Fox? That would be yes.
When a few Canadian reporters shared a table with him last summer during press tour the talk shifted immediately to the game. Fox describes the annual NHL playoffs as something of a “religious festival” at his house. Even though he grew up near Vancouver, and has lived for years in New York, Fox is a Bruins fan. He’s pals with former Bruins sniper-turned-executive Cam Neely and Fox’s buddy Denis Leary also bleeds black and gold.
The NHL knew he was hockey mad and sent him 16 cupcakes decorated with the colours of the teams that made it to the playoffs last spring.
“I stuck it all in the freezer, every time a team lost I literally stuck a fork in it.” He then tweeted out each photo. “My kids were bugging me to use my twitter account—I figured out a way to do it.”

He got to stick a fork in the Leafs early when his favourite team came from behind in Game 7 of the first round and eliminated the blue and white. Eventually the Blackhawks turned around and did to the Bruins what the Bruins did to the Leafs.
At the time of the interview, Fox commented on the Canucks-Rangers coaching changes. “It’s hilarious, they swapped coaches!” He wondered, like a lot of us, how that will work..”Maybe Torts [John Tortorella] has mellowed out. It’s going to be interesting to see how that flowers. I just don’t think it will work with the Swedes.”
Fox’s new sitcom, The Michael J. Fox Show, starts tonight at 9:30 p.m. on NBC and Global. His character, news anchor Mike Henry, will appear occasionally in a New York Rangers sweater. “He’s a New York guy,” says Fox.
There’s a hockey episode this season as Henry tried to get his son to appreciate the game. Fox says his own son, Sam, 24, like to watch but doesn’t play.
For more on tonight’s premiere, follow this link to the story I wrote earlier this week on Fox for The Canadian Press. 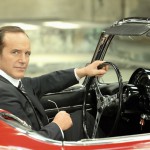 The Naked News and the damned