It was exactly 50 years ago today–on a Friday as well–that U.S. president John F. Kennedy was assassinated.
I remember where I was at the time–Grade One, Mrs. Holland’s class, Our Lady of Peace school in Etobicoke. Mrs. Holland was visibly upset as she wheeled out the large, boxy, black and white TV which sat high up on one of those chrome classroom TV stands. She turned it on, and we watched CBS news anchor Walter Cronkite make it official.
As I’ve written here before, a portrait of Kennedy hung in the school near the portrait of The Queen. I thought it was because he was Canada’s leader, but it was because he was Catholic.
I’ve asked several stars recently where they were when they heard the news, including Jon Voight, Beau Bridges, Mark Harmon, Margo Martindale, Dr. David Suzuki, Lloyd Robertson, Len Cariou and others. You can find the Canadian Press article with their remembrances here.
Here’s another memory, collected this week at the CBC Winter Launch in Toronto, from Kenneth Welsh. The veteran Canadian actor plays a political candidate in January in CBC’s The Best Laid Plans:

I was at the National Theatre School. I’d gone downstairs to the desk for some reason. The man at the desk, the security guard or something, said John F. Kennedy had just been killed. I almost started to laugh–“Is this a joke? Why are you saying this?”
And then I took the elevator, I went upstairs to where the class was on the third floor. I opened the door and said, “John F. Kennedy has just been killed.”
And the room just went silent. I remember this very distinctly. 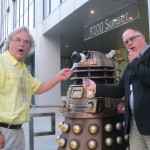 Doctor Who travels well at 50