Share
Share on Facebook Share on Twitter Email
NEW YORK CITY—Celebrated International Television Day Thursday (isn’t every day television day?) with other reporters from around the world by visiting HBO headquarters in New York.
The premium cable company wasn’t specifically celebration International Television Day–in fact, it never came up–but were rather holding international press sessions for three of their upcoming shows: True Detective, an anthology drama starring Matthew McConaughey and Woody Harrelson premiering Jan. 12 (also on HBO Canada), the third season debut of Girls (returning the same day) and the new black comedy Getting On (starting Sunday).
The pilots of Getting On and True Detective were both screened in HBO’s comfy, wood-panelled screening room. Getting On stars Laurie Metcalf, Alex Borstein and Niecy Nash as doctors and nurses who work in a grim geriatric care unit in a Long Beach, California hospital.
Having been in this kind of environment in recent years, especially in my dad’s final months, I can tell you creators Mark Olsen and Will Scheffer left nothing out. There are some very funny moments in the Getting On pilot, and also some that are tremendously moving.
Metcalf spoke with press later as did True Detective director Cary Fukunaga and Girls‘ Alex Karpovsky. Karpovsky says brace yourself for even more sex and nudity in Year Three of Girls, which returns on that same Jan. 12.
Detective will be an eight episode run with McConaughey and Harrelson, with a beginning, middle and end. Future seasons would feature different cast, much like American Horror Story.
The first season looks at two detectives investigating a 15-year-old crime. Both actors are quite good, but you’ll see an edgy side of McConaughey I’ve never seen before.
Getting OnGirlsHBOTrue DetectiveUncategorized 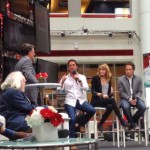