Shhh. There is a Canadian on The Americans. She’s our own little spy on the spy series, which returns Wednesday night for a second season on FX Canada.
She’s Holly Taylor, the 16-year-old actress who plays Paige Jennings, the daughter of the two Russian spies posing as an American couple in Washington at the start of the 1980s.
Keri Russell and Matthew Rhys play her undercover parents.
Taylor is barely Canadian. She was born in Middleton, Nova Scotia, to an Irish mother and a Scottish father. The family moved to New Jersey when Taylor was just two-and-a-half. She really doesn’t remember anything about living in Canada, but likes telling people she’s from there. “It makes me feel better about myself,” she says, “’cause people are always like, ‘Oh, you’re from Canada’–and then, it starts a conversation, so it’s cool.”
She charmed the pants off a group of international journalists who traveled to the Brooklyn set of the series late last year.
Her co-stars seem equally smitten, including Rhys and Russell.
Rhys, a Welsh actor whose press sessions are filled with jokes and laughter, tried to convince reporters he was “just like Holly.” Russell has a pet name for Taylor–“Holly Girl.” The two talk about their shared background in dance.
The two executive producers and showrunners on The Americans, Joe Fields and Joe Weisberg, are also big fans of the young actress.
“We first saw her on tape,” says Fields. “There’s just something that feels so real and so moving about her, she just so immediately inhabited that character.”
Weisberg–himself a former CIA agent–adds that there’s “a lot more for her to do this season.”
The series picks up–spoiler alert–shortly after the violent events at the end of last season, with Russell’s character still on the mend.
She emerges a changed woman. “It’s a new beginning for the two of them,” says Rhys, who talks about the “ever evolving relationship” between these two spies thrown together for their country but who seem–after years in a fake marriage–to be genuinely falling in love.
Rhys joked about the many disguises his character has to slip into on the series and says the makeovers usually mean another 90 minutes in the hair and makeup chair.
“It’s like a Formula One tire change,” he jokes.
Some of the looks have to be cleared by the producers in case the disguises look too much like real people. Others just look a little, well, ridiculous.
Rhys remembers one time last season when Russell walked in “basically dressed like John Denver.”
He had to say his lines looking away, he says, “because I can’t act with John Denver.”
For more on Taylor and The Americans, follow this link to the feature I wrote last week for The Canadian Press. 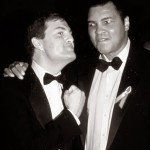