Paul Campbell plays office newbie Beckett Ryan in the new CTV comedy Spun Out (Fridays at 8 p.m.ET). I spoke with the Vancouver native a week ago and we talked about how he was kind of playing the calm-at-the-centre-of-the-crazy the way Bob Newhart used to play it on his ’70s and ’80s sitcoms.
Since Campbell, formerly on Battlestar Galactica and Almost Heroes, was only born in 1979, he related to a more recent TV comedy example. “I’m not as familiar with Bob Newhart`s work, but I almost liken it a little more to Jason Bateman on Arrested Development,” he says. “He`s a character I really connected with on that show.”
The 34-year-old says he does get in on the zany on Spun Out, too.
“The writers were really good to me…in that they also gave me plenty of opportunity to let loose comedically and be silly and explore,” he says. “There were a couple of episodes in particular where it’s really elevated stakes for what Beckett wanted that I kinda got to go off the rails a little bit. All within the confines of that world—never do anything completely outlandish. It was fun to see them write for the sillier, more manic side of Beckett.
It’s a little bit Screwball, then, would you say?
It is. Slightly heightened reality.
How great is it to be working opposite Dave Foley?
I honestly could not think of a better guy to play that role of Dave Lyons. When the producers first mentioned or hinted at pursuing him for the role I couldn’t believe it. He was such a big part of my world growing up comedically. I loved Kids in the Hall even though it’s a little bit before my time really. I remember being 13 years old watching Kids in the Hall and maybe getting 50% of the jokes. It was really special and different and groundbreaking what they were doing and I think Foley was a standout in that show, if it’s possible to stand out on Kids in the Hall. I always connected with him because he was the young, earnest one, a lot of who I was as a kid.
You got to see that side more on NewsRadio.
On NewsRadio I just always loved his comedic sensibility. To work side by side with him he’s an absolute pro, a complete gentleman,. Such a shepherd for all the younger actors on the show. Obviously, J.P. Manoux (who plays Lyons’ manic executive assistant] is a real comedy veteran as well
Would you agree Foley’s character on NewsRadio was similar to yours on Spun Out?
Absolutely,. We`ve commented on that a few times. He`s kind of taken over the Jimmy James role of the offbeat, eccentric millionaire, and I’ve taken over the Foley role. Yeah, its pretty cool. I’m in a pretty cool place in my career, I`ll tell you, yeah.
It also seems to be a great time to be working a Canadian TV comedy–or do you think the fact that there are all these new sitcoms shooting here now is just a coincidence?
It’s not a coincidence at all. I’ve spent a lot of time thinking about this. I think in the last couple of years Canadian networks have seen this great shift where they’ve started to invest more money in their shows. It really started out with the dramatic stuff, Motive, Flashpoint, where they started to get a foot in the door in mainstream US markets.
What has been the difference lately?
It’s really hard to make a show that people want to watch without spending money on it. You just can’t do it. Low production value is something people really don’t want to watch. You’ve got to spend the money to make the money and Canadian networks are starting to catch on.
Yet the Canadian comedies the private networks have made in the last year or two are struggling to break through. Why do you think that is?
I really don’t understand that, it’s a great question.
With our show and I think Seed and Package Deal and the other Canadian shows have done similar things…with Spun Out, we`re certainly not trying to hide the fact we`re Canadian, but we`re not overtly Canadian in the way that can often turn people off. It’s a generic comedy. It could be anywhere in north America. It has that mass appeal. They were very smart about producing a comedy that has that mass appeal.
For whatever reason, Canadians just don’t want to tune in [to a show that’s overtly Canadian]. I think that’s more historic. The last couple of years, I think, we’re starting to see that shift.
I don’t know what the key is and I hope maybe we`re the example where Canadians will tune in to see a Canadian show and be pleasantly surprised.
Not that there`s anything wrong with being Canadian—nothing wrong with that!
Battlestar GalacticaCTVDave FoleyPaul CampbellSpun Out 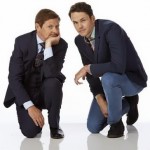