What with traveling to and from North Carolina and all, I didn’t get to chat with CHML’s Scott Thompson this week until Friday. We had plenty of catching up to do, including a post mortem on Rob Ford’s appearance on Jimmy Kimmel Live, another look at Ellen DeGeneres’ job hosting The Oscars and my visit in Wilmington, N.C. with Dean Norris and the rest of the cast of Under the Dome.

How much of a ratings impact did Ford have on Kimmel? Enormous in Canada: Jimmy Kimmel Live drew an overnight, estimated 302,000 Monday night on City stations across the nation when Ford was the main guest. The rest of the week across Canada: Tues: 83,000 (when Kimmel was still milking Ford’s appearance), Wed: 40,000 Thurs: 58,000.
Nearly half of City’s Kimmel Canada total came from the Toronto market Monday (147,000).
Scott seemed pretty excited about Norris, up until the point when I kinda blurted a key plot point about the last days of Breaking Bad. Seems Thompson still hasn’t gotten around to watching that great finale. Crikey! What are you waiting for man, Cranston to come to your home and act it all out for you?
You can listen in here.
CHMLDean NorrisEllen DeGeneresJimmy KimmelRob FordScott ThompsonThe OscarsTV on Film ProjectUnder the Dome 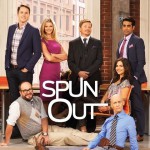 Spinning the Spun Out and BBC numbers