BEVERLY HILLS, Calif.–Soccer???? What the hell is that?? Are you ready for some football??

That was the message Sunday as NBC presented its Sunday Night Football panel. Al Michaels and Cris Collingsworth were in the house and were quick to give the boot to commie kick ball. Real footballs have pointy ends and NFLers don’t chomp on other guys’ necks.

And America loves it. SNF is the No. 1 TV show in the U.S. for the third straight year. It beats Big Bang, The Voice, NCIS–everything.

Hockey is to Canada what football is to America. I talked hockey with Michaels, who is a big L.A. Kings fan.I was hoping for some insight into Rogers’ big $5.2B deal sewing up national NHL rights for the next dozen years in Canada. NFL footballs keeps expanding down south–this year with Thursday night games on CBS–and Michaels doubts hockey is anywhere near a saturation point north of the border. Read his comments here in the feature I filed to The Canadian Press.

How important is this half-season NFL expansion onto Thursday nights? CBS has booked CEO Leslie Moonves and NFL commissioner Roger Goodell to meet the press later this week. 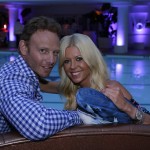 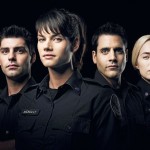 Rookie Blue’s future up to the producers says ABC