That was Paul Soles, putting it all in perspective, when I spoke to him last week about Rudolph the Red-nosed Reindeer. Fifty years ago, Soles was one of a group of talented Toronto TV and radio personalities who voiced the colourful band of misfits on the Rankin-Bass Christmas classic.

Still full of pep at 84, Soles was already established in Canadian media circles thanks to his long association with Take 30, Flashback and other CBC radio and TV productions. He says he grew up with CBC Radio drama, which he called Canada’s theatre. Soles went on to play the law breaker on CBC TV’s This is the Law and continues to act, appearing in everything from Less Than Kind to Rookie Blue. In between, he even worked several seasons on stage at the Stafford Festival.

Soles looked at the drawing of the little elf with the blond kiss curl and blue eyes. “I was anticipating the arrival at that time of my only child,” says Soles. You infer what a little elf would be like. It wasn’t hard to get that innocence, the shortness–I was never too tall for my age. All of that came out in the Hermey voice.

Still, 50 years later, Soles work on Rudolph is still charming new audiences in network TV broadcasts. He went on to perform dozens of other voices, most notably for the Spider-man cartoon series on Saturday morning television in the late-’60s.

For more on Soles and Rudolph, including the bizarre story of how two of the original puppets survived decades of neglect and are now worth more than the original cost of the entire special, follow this link to the feature I wrote for The Canadian Press.

The 50th anniversary broadcast of Rudolph the Red-nosed Reindeer airs Dec. 10 on CBS, Dec. 20 on YTV and Dec. 22 on CBC.

Rudolph has survived several parodies over the years, including this one below from this week’s Jimmy Kimmel Live: 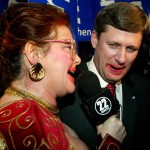 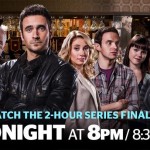 O yeah! Doyle drives off into the sunset after six seasons