SPOILER ALERT: If you haven’t seen the second season premiere of Jann, which returned Monday on CTV, you may want to read no further.

Or, what the heck, keep reading. What follows does not really give away any spoilers — unless you’re shocked to learn that this comedy comes no holds barred.

Season Two picks up right where Season One left off, and that is my one complaint with Jann — that it took too damn long to return. It’s been a year and a half, and there were only six episodes, which a lot of people probably binged. Unless you watch the first season all over again (which may be part of the plan), who’s going to remember where things left off?

Well, I’ll tell you. Our hero Jann Arden — based on a selfish, oblivious and professionally devalued version of the multiple Juno Award winner who plays her, Jann Arden — is about to embark on a “Burning Woman” concert tour with her arch rival Sarah McLachlan. At the same time, her sister Max (Zoie Palmer) is almost ready to deliver her fourth child, and their mother, Nora (Deborah Grover) has just been diagnosed with Dementia.

“What Did Jann Do?” is the title of the episode, but it could be called, “Does Anyone Remember What Jann Did?”

Not that it matters that much, except the writers have taken Jann to new heights, or lows, of self-centeredness in Season Two. She ditches her fam to ride the tour bus and make a buck, but does heed the call to race back home upon hearing that Max is about to deliver.

Step on it, she tells the tour bus driver, suggesting that child No. 4 is going to arrive as if delivered by , “a T-shirt cannon at a Flames game.”

Happy to report, therefore, that Jann remains refreshingly crude and hilarious. When I spoke with Arden Monday for a fun podcast interview (premiering here Thursday), Arden gave full credit to her producer/writers and creative partners, singling out Leah Gauthier and Jennica Harper.

There are several remarkable things about Jann Arden’s sitcom. First, how does a singer of sad songs, albeit a teller of funny stories, make such a successful leap towards becoming a scripted comedy lead?

Arden’s response is to say she’s not playing Lady MacBeth, she’s playing a sketchy version of herself and, yes, that certainly must help. But that doesn’t explain the pratfalls and all the other physical shtick delivered with Lucille Ball-like aplomb. Then there are the moments of sensitivity and empathy, mainly when Arden’s character is interacting with her slowly diminishing mother. It helps, sadly, that Arden lived through the love and pain of seeing her own mother eventually succumb to Alzheimer’s. Still, quite another thing to play it before the cameras. Arden can and does.

She’s the first to admit she has help. On some sitcoms, such as Bob Newhart’s long-running comedies from the ’70s and ’80s or The Mary Tyler Moore Show, the star basically plays straight man to a cast full of zanies. Eugene Levy basically pulled the same trick to Emmy glory recently on Schitt’s Creek.

Jann is set up more like Roseanne before The Conners, with the comedic force in the middle of a calmer universe. In the old days, seasoned pros John Goodman and Laurie Metcalf used to guide stand-up comedienne Barr to her marks like tugboats. To a certain extent, Arden gets similar guidance. She says she is in such excellent hands opposite Palmer, Grover, Elena Juatco (who plays her uber controlling new manager Cale), Jason Blicker (as old manager Todd) and the others.

The series is briskly edited but doesn’t seem like it, which is an artful trick. The new episodes were shot exactly one year ago, pre-COVID, so yes to group scenes and snow scenes.

Monday’s episode ends with McLachlan suddenly showing up and raging that Jann has stolen her lucky scrunchie; a WWE, front yard steel cage match breaks out. It is hilarious to see and so Canadian; hard to imagine Lady Gaga and Beyonce doing headlocks and body slams on a leafy front lawn.

If you haven’t seen it, you can stream it on demand on other CTV platforms. More guest stars are on the way, including Elisha Cuthbert and, in next Monday’s episode, Keshia Chante. Later in the new eight episode season, k.d. lang gets in on the fun.

Arden says she felt proud and inspired by all the Emmys showered on Schitt’s Creek Sunday night. With whispers of a U.S. deal for Jann being announced soon, there may be gold in this Canadian sitcom’s future as well. 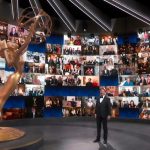 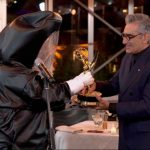