When I first heard ABC was reviving Supermarket Sweep I thought, is this another sign of the apolcalypse? Is the sight of people running around lunging at groceries really the right way to entertain folks in the midst of double-digit unemployment?

The question will be answered Sunday night at 8 p.m. ET/PT on ABC and CTV.

The reality/game show was promoted recently on an ABC virtual press session where more questions were asked of the host of the series, Leslie Jones. Jones shook things up on Saturday Night Live for five seasons, departing in 2019. She’s also got a Netflix comedy special coming in January (Leslie Jones: Time Machine) and has a role in Eddie Murphy’s “Coming to America 2,” due in December.

First up with a question was TCA press tour veteran Mike Hughes, who is always curious about how people get into showbusiness. Mike wanted to hear what it was like for Jones to find real fame in her late ’40s. At 47, Jones became the oldest person to ever join Saturday Night Live.

Jones added that it was “absolutely awesome that I made it at 47. I’m glad y’all didn’t meet me in my 20s and my 30s because I was crazy. Not crazy, but just a little bit more out of control or whatever.”

When she was younger, people never knew how to “translate” her, said the Memphis native. “Lorne Michaels probably was the first one who was, like, “Oh, I don’t know what to do with you either, but you coming to work for us because we’ll figure it out.”

Casting agents seem to get her now. Jones starred in the 2016 remake of “Ghostbusters” and also had a role in Judd Apatow’s 2015 Amy Schumer feature “Trainwreck.”

The six-foot-tall comedienne added that she hopes to “bring some jolts” to Supermarket Sweep which she undoubtedly will do. The series originally ran way back in the mid-’60s and was revived in 1990-95 and again in 2000-03. It basically shows teams of two contestants running throughout a supermarket trying to secure the largest value in groceries that they can cram into a cart.

If you miss the series just go to your neighbourhood supermarket and watch the frenzy when sanitizer or toilet paper are restocked on the shelves.

Jones was further asked about the eventual possibility of a celebrity edition. Who would she pick to run the aisles?

“Will Smith” said Jones. “It would be so hilarious just to see Will Smith run through the supermarket. Seth Rogen. That would be hilarious. I mean, Adam Sandler running through…” Jones kept naming names. “God, can you see Sherri Shepherd trying to run through the aisles? Oh, my God, Jennifer Lopez, Rihanna.  Oh, my God.  How do you think Rihanna would run through the grocery store?  She’d probably be real gorgeous.” 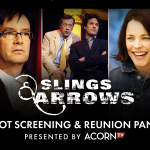 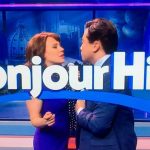