The final 2007-08 TV season ratings are in. Here is a link to the Top-20 U.S. network shows of the year as well as a link to the Top-20 demo hits.
The finish line for the annual ratings race, tracked since 1950 by Nielsen, is generally regarded as the end of the May Sweeps. American Idol (won last week by David Cook, above) easliy topped both lists for the fourth year in a row, tying Gunsmoke (1958-61) and one behind the five-in-a-row streaks of All In Ther Family (1972-76) and The Cosby Show (1986-90).
The list is dominated by reality fare unaffected by the writer’s strike; American Idol and Dancing with the Stars took the Top-6 spots in U.S. households. Scripted shows, naturally, took the biggest hit. CSI dropped from 4 to 9 and Grey’s Anatomy was down from 6 to 12 year to year.
The scariest drop, however, was among the networks themselves. ABC, CBS, Fox, NBC, The CW and Spanish language broadcaster Univision were down 8.2% in households and 11.8% in the younger demo.
Absolutely factor in the damage done by the writer’s strike, but there’s more to this grim picture. Fox was the only net to break even year-to-year; ABC, CBS and NBC were all down double digits in the demos, with CBS plummeting as much as 23% among the youngest viewers. 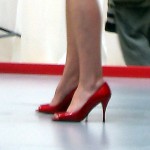 This Just In: CBC Run By Heels 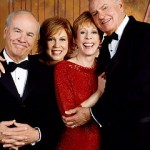 Glad We Had This Time Together