With apologies to David Letterman, here are the Top 10 Reasons why that Canadian Olympic “Own the Podium” slogan isn’t working out: 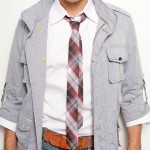 One Week In: Olympic Overload Time?