Do you believe in ratings miracles? That Canada-USA Gold Medal hockey final Sunday keeps looking bigger as the numbers come in from the United States. The afternoon tilt drew an average of 27.6 million viewers, the highest-rated U.S. hockey telecast since the “Miracle on Ice” USA upset at the 1980 Olympics. It marks only the third time ever a hockey game has drawn over 20 million viewers in the States. (The other two, both 1980: 34.2 million witnessed the “miracle” against the mighty Soviets and later 32.8 million saw the USA take the gold in the Olympic final against Finland.)
The U.S. viewership peaked to 34.8 million when Zach Parise gave half of Canada a heart attack by tying the score with 24 seconds left, sending the game into overtime. (Canada won, 3-2, thanks to Sidney Crosby’s heroics.)
In comparison, only 8 million Americans watched Game Seven of last year’s Stanley Cup final. More Americans watched the Sunday afternoon hockey final than the closing ceremonies, which averaged 21.4 million viewers. The Olympic hockey championship even drew more U.S. viewers than two NFL playoff games, with viewers in U.S. hockey towns like Buffalo, Pittsburgh, Detroit and Minneapolis all over the game.
For people who think hockey is a lost cause on TV in the States, consider this: the afternoon final outdrew 2010 U.S. broadcasts of The Grammy Awards, the Rose Bowl and the Daytona 500. It topped viewership for The Masters last April and the highest-rated NBA and World Series playoff games in 2009.
It may have helped NBC that CTV carried the game; in past Olympics, CBC spilled into many of those northern border markets stealing away viewers. Fewer Americans have cable access to CTV and no access to TSN or Sportsnet.

It also helped that the game was a nail biter and NBC did a terrific job on the coverage. NBC’s Mike Emrick (right) did a nice job on the play-by-play. NBC Olympic host Bob Costas, at his ninth Games, commented later that it was “one of the greatest sports events I have ever seen.”
A big plus too for Canadians watching the game Sunday on NBC was fewer commercial interruptions than over on CTV. The disparity seemed to indicate that there were TV timeouts during the Olympic hockey final, although only CTV crammed ads into them. 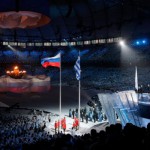 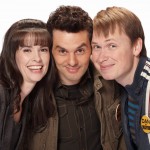 Hiccups, Dan For Mayor in a Landslide