HALIFAX, NOVA SCOTIA–Had to “Smile Awhile” when I spotted Charlie Chamberlain, Don Messer and Marg Osborne in a window display at The Puffin down by Halifax’s historical properties district. The hand-carved tribute to CBC’s Don Messer’s Jubilie (1957-69) is a Canadian boomer delight, one of several impressive wooden carvings made locally and on display at The Puffin, including a larger than life tribute to Pierre Trudeau. There are carvings of Rocket Richard, Gordie Howe but not of Wayne Gretzky as the store owner requested. The artist wasn’t sure how the Great One would turn out and didn’t want to risk the tribute.
Don Messer’s was a half hour music series which originated right from Halifax. In the mid-’60s, it was second only to Hockey Night in Canada in popularity in Canada, outdrawing even such popular U.S. imports on the public broadcaster as The Ed Sullivan Show. When CBC cancelled the fiddle show in ’69, people went nuts. CHCH picked it up and the show continued in syndication until Messer’s death in 1973.
Wooden Don and company, by the way, are not for sale. 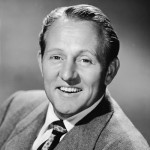 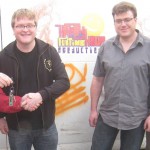 Drunk and on Drugs with the Trailer Park Boys