HALIFAX, NOVA SCOTIA–Barely recognized Robb Wells and John Paul Tremblay (above right with me and Mike Smith) on location at their new series Drunk and on Drugs. The former Trailer Park Boys have both shaved off their face hair. Gone are Ricky’s trade mark sideburns and Julian’s black hair and goatee. J.P. in particular was barely recognizable, especially without a mixed drink in his hand. He had just shaved off the beard the day before and said his own kids didn’t recognize him. “I hate it,” says Tremblay, who had been dyeing his hair black for ten years. “Nobody is buying me drinks anymore.”

“The Happy Funtime Hour.” Somebody, however, slips them some drugs and what follows is one crazy hallucination from multiple perspectives. The actors play dozens of characters; Wells was dressed in a bee costume yesterday with a pizza box smashed over his head. Yesterday, at a vintage motel set up, Cops and Nazi’s were pummeling a stand in for guest star Maury Chaykin. Some of this deal will be animated, some shot to look like grainy WWI-era footage. It all takes place in–wait for it–Port Cockerton.
Director Ron Murphy, who I ran into a few months ago on the set of Dan For Mayor, agreed with visiting critic Rob Salem’s assessment that this series was basically Monty Python on drugs. A giant blue handicap parking sign was painted on the parking lot pavement behind where the director was standing.

A giant square penis was about to be attached. “Do you want us to cock up the handicap sign?” a production designer asked Murphy. “Get Mike [Smith] to do it, he’s good at cocking up stuff,” said Murph.
Six episodes are being shot, with red hot Canadian Jay Barushel (She’s Out of My League)–apparently a huge TPB’s fan–working a few shows “for Canadian money.”
None of it makes sense. The shows are a half hour long and its called “The Happy Funtime Hour.” The second season, according to Smith, is being shot first.
It’s going to be amazing.
Look for it on Showcase next winter. Fasten your seat belts.
Trailer Park Boys Mike Smith J.P. Tremblay Rob WellsUncategorized 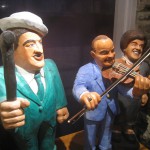