Who knew Lost Girl lived in Etobicoke? Well, darkest Etobicoke, at any rate. The west end Toronto ‘burb is home to Lost Girl, a sexy new sci-fi drama coming to Showcase this September. The series stars Anna Silk (Erica’s same sex temptation last season on Being Erica) as yummy succubus Bo, who feeds off the sexual energy of mere mortals. Bo discovers she has this gift when she drains her first boyfriend to death in their first sexual encounter. Excuse me? This thing’s going to be freakin’ huge at ComicCon.
Striking Silk seemed more like a nice girl from New Brunswick when I met her Monday on the Lost Girl set. She was limping, but she insisted it was not from draining anybody, it was just some training mishap.
Earlier in the day, as unit publicist and birthday girl Adrienne Kakoullis and TV Boy listened in on earphones, Silk powered through a two page scene opposite co-star Kris Holden-Reid. He plays a shape shifting Fae (not Tina Fae) who also happens to be a homicide detective. Just the facts, ma’am.
The scene was shot on a giant bar set, one of several cool set ups inside a 30,000 sq. ft. converted Etobicoke warehouse. Silk’s character, Bo, lives in a grey, run down room that looks like it was dressed by Tim Burton. The bartender has the coolest lair of them all, a dark Gothic set up supposedly located right under the bar. There’s a twisted staircase down to where his pet troll supposedly lives. It all looked very Hilarious House of Frightenstein.
Interviews were conducted on a slightly cheerier or at least more antiseptic set, the science lab where Zoie Palmer (from The Guard) keeps Bo’s sex draining thing under control.
Also spoke yesterday with Ksenia Solo, whose Emily Extra Strange look is as cool as her name. She was all goth’d up in black everything which somehow still worked with her pink fussy slippers. Solo plays Bo’s best pal, a spunky human sidekick to the kick-ass lead.
Spoke with Solo solo next to a dark dungeon room complete with nasty looking chains, whips and even a metal tray full of (fake) hot coals. A carousel horse stood in one corner wearing a kinky S&M mask. If the matrons over at nearby Sherway Gardens only knew.
Lost Girl is a Canwest venture in association with Prodigy Pictures. Major domo and former Alliance/Atlantis and Fireworks dealmaker Jay Firestone has the corner office where he can keep an eye on his Aston Martin.
Spotted my old University of Toronto pal Peter Mohan (creator of Blood Ties) on a catwalk overhead on the way out of the building. He gave me a tour of the remarkably contained makeshift studio, which included a visit to the world’s cleanest writer’s room. It looks like the model suite of writer’s rooms.

Mohan—who crafts this deal with fellow writer/executive producer Michelle Lovretta–was easy to spot in a black “Evil Typewriter” T-shirt with a bunch of skulls and crossbones flying out (order one here), the perfect look for a Lost Girl scribe. Mohan’s penchant for the dark and theatrical all made sense to me once he revealed his uncle is none other than the legendary Fr. Tom Mohan, the impressive Basillian who was principal of Michael Power way back in the day when I was among the inmates. Mohan would stand at a podium on stage in the gym and boom, “If you don’t like it here at Michael Power, then LEAVE!!” every fall, scaring the crap out of the next crop of Niners. I want a seat in the tidy writer’s room when Peter gets around to creating THAT series.

This Week’s Podcast: Behind the Upfronts 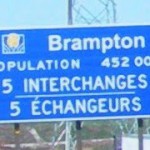 Break No Boost for Hiccups, Dan For Mayor