Wendie Malick was in Toronto Friday to promote the second season premiere in Canada of Hot in Cleveland (tonight at 8 p.m., CTV). Malick’s no stranger to Toronto. She was born across the lake in Amherst, N.Y., and grew up in picturesque Williamsville, both just outside of Buffalo. Her family used to summer on our shores. “We were border people,” she says. “We had a house on Lake Erie.”

Her parents, in fact, came up to Toronto Friday to join her on this promotional jaunt. (Hot in Cleveland shoots in Los Angeles.) Not that they were able to see much of their daughter. They were out and about while Malick was grinding out interviews every 15 minutes in a downtown Toronto hotel room. CTV had her up early with Roger and Marilyn on CHUM-FM and them on Marilyn Denis’ weekday morning TV series at 10 a.m. Then a parade of guys like me with red noses and digital recorders.

Hot in Cleveland was an out of the box hit–especially on CTV in Canada–when it premieres last year. The sitcom casts Malick, Valerie Bertinelli (One Day at a Time) and Jane Leeves (Fraser) as three friends from LA on their way to Paris who wind up in Cleveland when their plane makes an emergency stop. A few wolf whistles at the local bar later, they start to feel at home in a town where the shallow Hollywood standard of being forever young and skinny does not apply. “This series is really all about feeling comfortable in your own skin,” says Malick.
White plays their snarky senior superintendent. Malick’s character, Victoria, is a soap diva and Malick, a former model, is loving every scenery-chewing, Susan Lucci-busting minute. “She’s an amalgon of several  people I know,” says Malick, who relates to Victoria’s quest to start a new chapter in her life. “I love the idea that you can still write down your bucket list and see how many of those things you can tick off.”
With all the fuss over Betty White, Malick and her two veteran comedy co-stars often get overlooked. White’s red hot success at 89 is a story, but Malick isn’t shy about hr age either. She turned 60 last month and embraces her status as a late bloomer. Malick says she never even thought about acting until she was 30. Her first big break came in the early HBO comedy Dream On. Malick was already 40 when that series put her on the radar.

Years later, the actress, who has dozens of sitcoms to her credit, worked with Leeves on Frasier. Back then she was playing Dr. Crane’s dad’s love interest; now she’s about to re-team with John Mahoney when he guest stars this season on Hot in Cleveland. This time, however, Mahoney is wooing White.

The many guest stars from TV’s golden age are part of the fun of Hot in Cleveland. Ed Asner, Wayne Knight, Carl Reiner, Hal Linden, Tim Conway and Juliette Mills (playing Malick’s mother) also made appearances last season. “”People love them and you realize they still have it,” says Malick.
Another Fraser grad, Peri Gilpin, is booked for this season. Tonight’s episode features an appearance from White’s ’70s co-star Mary Tyler Moore, now in her 70s. Malick says she’d love to get her old Dream On pal Brian Benben into the mix but he’s busy now on Private Practice. Her former Just Shoot Me pal Enrico Colantoni is tied up with Flashpoint.
Another long time friend, Christine Baranski, is featured each week on The Good Wife. Malick and Baranski are just weeks apart in age and both share a Buffalo Girls vibe. “She went to the high school in the next town over,” says Malick. What is it about Buffalo and show business? “We have to develop a sense of humour,” says Malick, “otherwise the weather will get us down.”
Hot in Cleveland Wendie Malick Betty White Jane Leeves Valerie BertinelliUncategorized 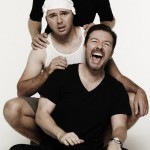 Laugh along with Gervais at An Idiot Abroad 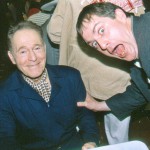