People ask: you were just down at TCA, TV boy. What are the hot new shows?

After saying, “Mister TV Boy to you,” I usually say I like what I’ve seen so far from The Borgias, that Matt LeBlanc is surprisingly effective in Episodes and I also like what I’ve seen of his former Friends mate’s new series Mr. Sunshine. That new Fox animated comedy Bob’s Burgers makes me laugh. Carla Gugio is in this season of Californication, so I’m back watching that.
If you’re looking for something silly and different tonight, check out An Idiot Abroad (premiering at 9 p.m., Jan. 21 on Discovery Channel and airing Saturday nights at 10 p.m. in the States on Science). The series stars Karl Pilkington, the daft friend of Ricky Gervais and Stephen Merchant. Basically, as Gervais admits, this globe trotting reality series is a string of Punk’d episodes with the joke on Pilkington. He’s send around the world (including, on tonight’s episode, to the Great Wall of China) as some sort of devilish experiment. Gervais and Merchant want to see if their Eliza Doolittle will become more worldly as a result of this prank. Gervais really just wants to laugh his ass off while Pilkington gets more and more miserable.

One could see Gervais sending Pilkington in his stead to host next years Golden Globes Awards.

All three were at press tour via satellite from England with Gervais unable to contain his glee as Pilkington squirmed. Still, the lucky bastard got to go to the Taj Mahal in India and also visits Egypt, Brazil, Peru, Mexico and Jordan before returning home to London eight episodes later.
Pilkington, the funny one from the animated radio series these three do over at HBO, was typically deadpan about the whole ordeal. “The fact the nurse gave me an injection that protects me from dirty chimps put a damper on the whole thing,” he snarked.

Gervais was asked at press tour if there was every any thought to sending all three of them on the road. He reacted with the same kind of blunt honesty he displayed during the Globe Awards:
“There was absolutely no chance of all three of us going away. It was a practical joke,” he said. “I wanted him to hate it. It was a social experiment. It was my gift to the world, really. I can’t get enough of Karl. I think he’s the most fascinating thing on the planet. Honestly, I treat it like I found the missing link, or like — it’s amazing. Okay?” 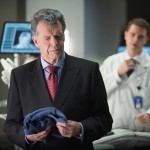 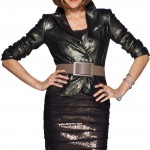