This week, CHML’s Scott Thompson wanted to hear my take on what’s going on with this whole Rupert Murdoch hulabaloo. Would this hurt the Fox TV News service, he asks.
While I cheer the tear down of all-powerful media companies and any exposure of their alleged shady dealings the disturbing thing about the Murdoch deal was the quick and viral reaction to his wife swatting away a pie thrower during the hearings. That she was so quickly seized upon as a hero suggests the real story of criminal activity has already receded back beyond the summer haze.

Still, Murdoch has made a lot of media enemies over the years. Had lunch with a pal at the New York Times Wednesday and he told me the suits there–who have no love of the grasping media barron–are practically doing hand stands in the hallways. There are many who are enjoying seeing the old Aussie squirm.
Scott also asks about the trip to New York. I’m in Manhattan to check out the giant outdoor set of Boardwalk Empire, which returns to HBO Canada for a second season in September.
You can listen in here. 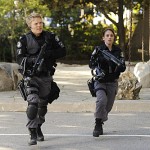