VANCOUVER–Happen to be back in B.C. this week so thought I’d check in on a place I didn’t have time to visit when I was here a few weeks ago–Save-On-Meats.
Smart move. Had the best corn beef sandwich ever at this Gastown marvel, a 55-year-old butcher shop and deli that is being restored to its former glory and then some by entrepreneur Mark Brand.
Brand and his dynamic eatery will be the subject of Gastown Gamble, a six-part documentary reality series that premieres Jan. 18 on OWN Canada. The series is being executive produced by Andrew Williamson at Lark Productions. Williamson is also behind the upcoming Real Housewives of Vancouver and, yes, he acknowledges, the two TV projects could not be more night-and-day.
Brand and his wife Nico have sunk a fortune into bringing Save-On-Meats back in what remains one of Canada’s most challenging neighbourhoods. Gastown has plenty of charm and character but a few too many characters. Addiction remains a big problem in this area. Visitors get the “don’t go wandering in there at night” warning when heading for the east side ‘hood.
The Hastings Street landmark was headed for Condo-ville when 36-year-old Brand stepped up and took what amounts to a huge leap of faith to restore the business as well as the four-storey building. Have you ever re-visited a favourite haunt from the past, watched it slip into neglect and thought, dammit, this just can’t be allowed to happen? Brand had that same impulse about Save-On-Meats. The difference is he acted on it. Nico made the same crazy commitment, quiting her job in the fashion biz to become a butcher!

Brand, who already operates several restaurants in the area (including on called Sea Monstr Sushi), has reached well beyond his own immediate family for help. He’s recruited many people from the community in the restoration as well as the day-to-day operation of the business. Meat not being prepared for customers in the deli or in the butcher shop was being ground up for meat loaf in a second floor kitchen during Monday’s tour. It was then distributed to the needy in what Brand has set up as a very hands-on community outreach program. He’s literally training people at risk to feed themselves, a tremendous social commitment in the midst of trying to launch and resurrect a risky business.
Other corners of his warehouse are used for very different functions. He has art studios set up inside what were once giant meat lockers. The place is like a community college of art, meat and activism.
Downstairs, on the main, floor, the deli has the look (and smell) of a true ’50s diner. Booths run along one wall and hand-painted signs (lettered upstairs) above the deli counter hearken back to a Rock Around the Clock era. There’s even a take-out window out front. The meals are very economically priced and the sandwiches, burgers and fries are amazing.

On the other side of the wall, the butcher shop offers all kinds of cuts of meat, with plenty of sausages up front. Everything is prepared on the premises. Judging by the Bentley’s cruising by, some of Vancouver’s wealthier folk have discovered the place but, again, everything is priced within reach of the surrounding community.
Others are discovering the place, too. Food Network star Guy Fieri came up to Vancouver to shoot a segment of his series Diners, Drive-Ins and Dives at Save-On-Meats and Brand says he fell in love with the place. Fieri’s B.C. episode airs later this month.
Brand, who has migrated from one coast of Canada to the other (and also worked a few years bartending in Australia), hopes the TV show will keep the place packed. It was already pretty busy at lunchtime Monday.
The neon marquee out front with the famous piggies was restored partially through funding from the city. Vancouver seems to value its Gastown charms with a few other businesses making similar upgrades. 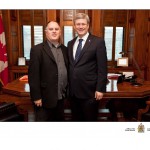 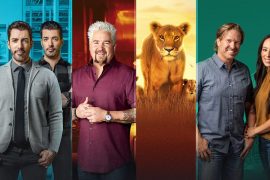