Share
Share on Facebook Share on Twitter Email
It was just about a year ago, in January of 2012, when Larry Hagman faced television critics as a group for the final time. The TV icon passed away Friday at 81 of complications from cancer.
He was battered but unbowed, thin from the cancer treatments he had endured as well as other serious ailments. Inside it was the same old Larry, however, feisty and fun as ever.
Hagman sat after the Dallas press conference and handled questions the way J.R. used to handle rivals in the oil business. This was especially true afterwards in the press scrum. Hagman sat and his large Stetson helped keep reporters at least a brim-length away. You could tell by the glint in his eye that he was energized by the attention, which must have been a sweet reminder of the rock star-like frenzy surrounding those early Dallas years.
“Being King is nice,” he mused about those days. “We were living like stars in the ’20s. Get a good seat anywhere–and still can.”
So you couldn’t blame Hagman coming back for one last ride, even at 80 and in poor health. There were questions about the rigours of shooting a television series. Hagman said he was on a civilized schedule of just mornings or afternoons. No more 14 hour days for him.
The native Texan has seen his share of doctors. A notorious drinker, he survived a liver transplant when he was 65. “That was scary,” he says. In the year leading up to the new Dallas launch he had undergone treatment for Stage Two throat cancer. “It makes you appreciate life,” he says, “and take it easy and don’t get too involved with the future.”
Linda Grey, who co-starred with Hagman on both the old and new Dallas, had talked her friend into adopting a vegetarian regime after his liver surgery, something he embraced with a diet of spinach, cucumbers and garlic.
Would Texas oil man J.R. ever go Vegan, he was asked. “If there was any money in it,” shot back Hagman.
Getting back into character was “like getting into an old pair of slippers,” he said. J.R. is such an iconic TV character, he figured, because “everybody’s got a jerk like this in their family. A father or brother or uncle or cousin—that’s what makes him so appealing, they can hate him because they know who he is.”
Just don’t call J.R. one of the one percenters. Aware of the backlash against the rich in America, Hagman—a passionate Democrat–saw J.R. more as a “wildcatter. He’s not one of these corporate guys, he’s a guy who goes out and does it for himself.”
Hagman says Dallas rescued him from a low point in his career. A comedy star with Barbara Eden on I Dream of Jeannie in the late ‘60s, offers had dried up for the one time Broadway player by the mid-‘70s.
He recalls getting two scripts: one was to play a high school gym teacher on The Waverly Wonders and the other was for Dallas.
Hagman’s wife of 58 years, Maj, started reading the Dallas script. “After five minutes she said, ‘Larry, this is the show—there’s not one redeeming character.’”
Waverly, which eventually starred Joe Namath, lasted one month on NBC. Dallas lasted 14 seasons.
Dallas was a worldwide TV phenomenon, especially during the early years of its 1978-’91 run. The “Who Shot J.R.?” episode drew 83 million U.S.viewers, the second highest-rated TV episode in U.S, history (behind only the M*A*S*H finale).
In order to return for that cliffhanger, Hagman famously held out for a big pay raise, earning a reported $100,000 a week, making him the highest paid actor on television at that time.
Asked during the press conference if he ever thinks about how he helped inflate today’s big TV salaries, Hagman nodded in agreement and said, “I think everybody on Friends owes me at least 10 percent.”
The truth is Dallas was a bigger hit than Friends, especially around the world. “There was no way of knowing how big it would become,” he says looking back. “And if you think it was big in America, you should go to Europe. You know, they banned us in France.”

Asked if he remembered why, Hagman shot this reporter his best J.R. look. “You know the French for gosh sakes—who knows?”
Hagman made several appearances at press tours over the years. Not too long ago he was there to promote an appearance on Nip/Tuck. He played a patient there to have his testicles surgically enlarged. Hagman grinned from ear-to-ear during that session. Eight years ago, he and his wife Maj made the trip back to the Century Plaza Hotel in Beverly Hills just to attend the 20th anniversary of the TCA Awards. Classy.
I asked him at that time about the legendary press tour party at Hagman’s house in the late ’70s. That was before my time on the TV beat, but I never tired of hearing about from press cats who were there. (Read Jim Bawden’s lively account here,)
Hagman threw his doors open to critics a second time, in 1984. That one is covered here by Dallas-based critic Ed Bark.)
“I have a very good memory of that,” Hagman told me. “Somebody left the gate open and three thousand people came in. I think there’s still a lawsuit going on.”
It was another time, back when network TV was at its uncontested peak, and Larry Hagman was King. Condolences to his family and friends. The second season of Dallas premieres in January on TNT, with Hagman reportedly in about six episodes. Don’t watch with sadness; think instead of that grin and that glint. Hagman had the last laugh, well paid right up until the very end. 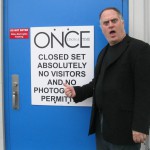 SET VISIT: Once Upon a Time 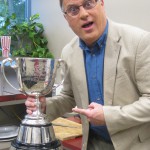