I’ve met critics who think they are rock stars, but only one I knew really was.
Greg Quill died suddenly on Sunday at his home in Hamilton, Ont. He was 66.
He had recently been diagnosed with sleep apnea and apparently died from complications due to pneumonia.
Quill covered a variety of beats at the Toronto Star, all of them well, including television. I met him 20-odd years ago on Television Critics Association press tours in Los Angeles. He was a big, mountain of a man, an imposing presence in any room, but a good guy and quite cordial up close. He was a very good writer who brought you to the essence of the subject at hand and took you there in a sparse yet colourful, original way.
Prior to his journalism career, Quill was a noted rock and folk musician who was a household name in his native Australia. He performed with the band Country Radio, sharing stages in the ’70s with Elton John and Creedence Clearwater Revival. Later he played with Southern Cross.
He looked more like a rocker or even a bouncer than a critic, which always gave comfort to the rest of us.
There’s a tribute to Quill in Monday’s Toronto Star, you can read that here. Condolences to his wife, Ellen Davidson, and family. 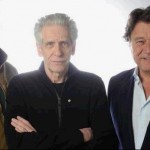