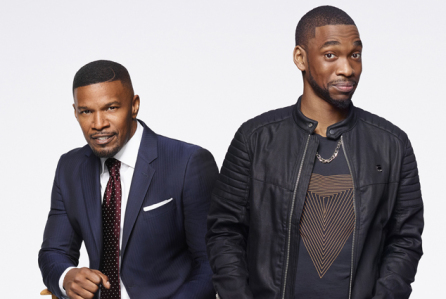 Jay Pharoah stars in the new Showtime comedy White Famous. The series premieres this Sunday in Canada on CraveTV.

I spoke with Pharoah on the phone about a month ago. The publicist threw one of those last-minute curve balls before putting him on the line: “No questions about Saturday Night Live.”

Pharoah owes his fame so far to his six years on SNL. While I get that PR people want reporters to stick to the show they’re currently promoting, being told not to go there is always limiting.

The Virginia native, who turns 30 today, may simply not want to talk about his exist from the series. He always seemed underused, except for  when the comedy showcase needed his uncanny Obama impressions.

Mooney is apparently loosely based on the rise to fame of an other executive producer on the series, Jamie Foxx. Foxx has a scene in the pilot that is brave, weird and distracting.

The whole pilot is like that, too. Some scenes land better than others, as do the jokes. The good news, according to my TCA pal Eric Deggans, is that the series gets better. Check out Eric’s take for NPR here.

One of Pharoah’s costars on White Famous is Utkarsh Ambudkar, who plays Mooney’s hyper-aggressive agent, Malcolm. In an early scene, he asks Mooney, “Don’t you want to be white famous — like O.J., Will Smith or Tiger Woods?” I asked Pharoah of he ever had an agent like Malcolm:

Luckily no, I haven’t. Everybody is saying Utkarsh is so great — his delivery and his grasp of the character. I’ve never had to encounter somebody like that. My agents are like my friends. If there’s anything I need, I can reach out and talk to them.

I’ve heard stories of agents who are nightmares, just trying to get the job,  It doesn’t mater if you’ve got to do a commercial for Carl’s Jr., It’s “going to be a breakthrough.” I’ve heard about them. My agents make sure its going to be good for the brand.

How many times does your character fire Malcolm this season?

You gotta tune in a lot.

You performed at Just for Laughs in Montreal in 2016 [Pharoah also just worked JFL42 in Toronto]. How did you enjoy that?

It was a great experience, I had a lot of fun at Just for Laughs. You feel the crowd, it’s a good place to work things out, I didn’t have to go too far back into my bag.

Does playing a fictional stand-up comedian change your approach when you go back to being a real one?

I mean, look, I’ve been doing stand-up since I was 16 years old, evolving just as a person and that gives insight into anything new I add to my set. I don’t have to change anything, I’ve just got to be me, I’ve got to be consistent and make sure I do execute. As long as you deliver, its fine.

Was being famous something you were aiming for when you started out?

I always wanted to be in the industry; I always wanted to break through. I didn’t really know how. So when I was a kid man, I wasn’t a typical, “I’m going to sit down for 30 hours and become a physicist or a rocket scientist or something like that. That wasn’t me. I was a  creative young dude who would just imitate likes. How do you spin that into something substantial? So it was community theatre. It was breaking in the stand-up. It was going in the studio and rapping — it was all of that. Those things kind of helped me in my childhood. I always knew I wanted to be in the industry. Somehow I always wanted to end up here and now I’m here.

Have you received any advice on fame from your producer Jamie Foxx?

I think it was in the script it was the same words of advice that [another character in the pilot played by] John Witherspoon gave me. Don’t forget your N-word coat. Don’t forget where you came from no matter how big you get. Be comfortable, make things your own, have fun while you’re doing it and enjoy it. Don’t loose yourself and have fun. There you go.

Do you draw any career inspiration from Jim Carrey? He started out as an impressionist and wanted to bust out beyond doing other people’s voices.

Who makes you laugh on TV now?

There’s so much television now that its ridiculous.; I like Atlanta. I’m definitely watching that. And I can name a million other series that are on that I only watch a couple of episodes of. I enjoyed Lethal Weapon, Damon Wayans is really good in that, he’s good in that.

This sounds ridiculous but maybe its not ridiculous– John Tapper. He needs to run for president. Bar Rescue? Hilarious, he is freakin’ hilarious. I love that guy.

Read more about Jay Pharoah and White Famous here at this article I wrote for this month’s issue of Movie Entertainment magazine.