Alan Arkin was born in Brooklyn, N.Y., a fact that will surprise almost no one who has heard his voice.

Here’s a surprise though: he spends almost half the year in Canada.

That was the fun fact I learned after speaking with the Oscar-winning actor on the set of the terrific Netflix comedy The Kominsky Method. Arkin joined co-star Michael Douglas and series writer/creator Chuck Lorre (above) on the set — located on the Warner Bros lot — Thursday during TCA’s Studio Day.

Arkin says he was in Nova Scotia Years ago and fell in love with the region. “I went to Cape Breton and then crossed the causeway. I got to the other side and felt like I was home.”

Twenty-five years ago, he bought a house on Canada’s East Coast. “We were there for five months last year. We try to stay as long as we can.”

“Working with him was a dream,” Arkin continued. “There was no way for it to be a better experience than he made it. He turned the whole town into a family, the whole town of Fort Briggs, California.”

“Where have you ever heard anything like that? It was an extraordinary experience.”

Arkin taked about a couple of his other signature film roles. He singled out “Little Miss Sunshine” as another personal favourite. He was very at home, he says, playing “an old curmudgeon who shoots his mouth off.”

One role he was less fond of was playing the attacker in “Wait Until Dark.” 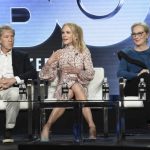 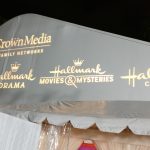