Thursday night at 8 p.m., the hour-long final episode of The Big Bang Theory will bring to an end one of the greatest success stories in TV history. The show CTV took a chance on in 2007 will have racked up ten, consecutive No. 1 finishes for an entire season. Not American Idol, not The Cosby Show, not All in the Family — nothing else comes even close over the years in Canada.

I’ve been called upon to weigh in on the finale on several Canadian radio and TV stations Thursday and Friday. Some have also asked for some perspective on Sunday’s final episode of Game of Thrones.

The subject of final episodes is something I’m well acquainted with as one of the writers who contributed to “Television Finales: From Howdy Doody to Girls” (2018, Syracuse University Press). My chapter is on the final two episodes of Johnny Carson’s 30-year reign as King of late night on The Tonight Show.

I still consider the final episodes of Newhart (1982-90) to be the gold standard when it comes to sitcom endings.

Decades before he played Arthur Jeffries (aka “Professor Proton”) on The Big Bang Theory, Bob Newhart was one of the most popular sitcom stars on television. He ended his second hit sitcom, Newhart, by harkening back to his first. At the very end of the episode, in a scene that began in darkness, the lights went on to reveal that Bob was in bed with Emily (Suzanne Pleshette), his TV wife from his first series. The suggestion was that the entire second series, where Bob’s character Dick Loudon ran a New England Inn and was surrounded by idiots, had been a bad dream.

The studio audience who attended that taping were probably wondering why they were sitting in the dark so long. When the lights went on, those in the know started screaming and laughing just at the set reveal. What you see today in viewing the episode is actually the second take, shot because the first one was ruined due to too much laughing.

Newhart remain s a master of timing and he puts on a clinic in the scene. He tells Emily his dream had him married to a beautiful blond (played in the second series by Mary Frann). He then looks at Emily and says, “You…you really should wear more sweaters.”

According to Newhart himself, his real life wife Ginnie should get credit for the idea behind the famous Newhart ending — it was her suggestion.

The challenge for Big Bang co-creators Chuck Lorre, Bill Prady and the rest of the writers will be to try and come close to the Newhart standard. Here’s what could happen:

Going down: It will end with the elevator. The one in the apartment where Sheldon, Leonard and Penny all live has been broken for 12 solid years. The excuse once given was that Sheldon damaged it in some wayward science experiment he once conducted.

The popular guess is that the show will end with the elevator finally opening. Inside will be:

Charlie Sheen, who steps out, looks around, and says, “That’s funny– I could have sworn I left my career right here.”

Sheen, of course, was the star of Lorre’s last 12-season wonder, Two and a Half Men. Whatever one thinks of that series, there would be no Big Bang Theory without it. Sheen was a substance-abusing nightmare to work with and eventually was fired from the series; he and Lorre did not part on good terms and Sheen did not even make his character’s own funeral episode. Still, time has passed, Lorre is a zillionaire and Sheen may be broke enough for a cameo. Let the healing begin.

Or– Going Up: the elevator opens and there is Newhart. He steps out briefly and doesn’t recognize the floor. He gets back in, clutching a fuzzy red sweater. As he pushes the button he says, “Sure hope Emily will like this.”

Or: Sheldon, Leonard, Penny, Howard, Raj, Amy and Bernadette all crowd into the elevator. The door closes, the elevator starts to descend and then the light goes out. Everything fades to black as Journey’s “Don’t Stop Believin'” blares. End of series. 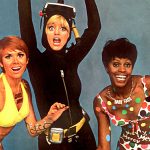 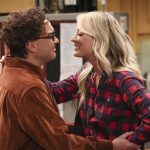