Well, that was no Newhart.

Neither, however, was it a Seinfeld. The hour-long series finale of The Big Bang Theory was simply two more episodes that will run forever in syndication and not stand out from any that went before them — which is exactly the way executive producer Chuck Lorre must have wanted it.

SPOILER ALERT: If you haven’t watched the episode yet, don’t read any further.

Thursday night we learned a few final lessons. One was that broken elevators can be repaired. Penny, of course, makes the discovery. It played a role in an important scene but it wasn’t used in any of the painfully obvious, jokey ways I had speculated on in an earlier post.

For example: the first half of the hour brought news that Sheldon and Amy had won the Nobel prize for Physics. The entire gang decides to fly to Sweden to support their friends at the ceremony. It looked like they were going to all stuff themselves and their luggage into the elevator and then, in true sitcom fashion, get stuck between floors. There would be an elevator shaft scene, a race to the airport — Lorre made sure it didn’t happen.

The next big reveal was that Penny is preggers. Seems she’d had too many cocktails the episode before and jumped her favourite physicist — even though she may have been fantasizing at least a bit about Idris Elba.

Raj found Amy sobbing in a ladies room after seeing her frumpy self in all the Nobel Prize photo coverage. He takes her on a Beverly Hills shopping spree and goodbye Broom Hilda, hello gorgeous.

This freaks out Sheldon, who asks why everything has to change. Penny sets him straight in a last little heart-to-heart, pointing out that he’s married and has friends and has probably changed more than any of them.

“I guess the only thing that actually stays the same is that things are always changing,” she tells Sheldon. The Penny drops: he sees that change is the only true constant, be it among friends or even network TV schedules.

We wonder, however, a scene or two later when Sheldon shows that he’s still a selfish little baby genius. Fretting about germs spoiling his big award day he asks Leonard why Penny keeps running to the airplane bathroom. The beans are spilled: Penny’s not sick, she’s pregnant. Seldon’s only reaction? Whew –can’t catch that.

Leonard finally snaps and tells Sheldon he’s had it with his selfish antics. The others all agree. It’s no excuse anymore that he never means to be unfeeling or insensitive, and it is no longer acceptable.

The gang threaten to catch the next plane home, but have a change of heart. All put on their formal wear, support their friends and attend the ceremony. Amy’s speech is short and sweet. Sheldon miraculously ditches the 90-minute back-patter he had prepared and finally grows up, telling his friends from the podium that he loves them and could not have accomplished anything special without them.

There was some genuine emotion in that last part. Lorre and the others pulled a few Pinocchio strings, turning their hero a real, live boy by the end. There was also a bit of Wizard of Oz.

It was a happy ending, but maybe not for broadcast television. I’d been telling people all day Thursday in TV and radio interviews that the end of The Big Bang Theory is not the end of traditional, live audience sitcoms. Now, however, I am more inclined to accept Penny’s theory about change being the only constant.

It’s not that American situation comedies won’t be shot before studio audience anymore — CBS has just announced a new one, to be produced by Lorre and starring his old Mike & Molly star Billy Gardell, is scheduled for next fall. It’s that network TV, with all those commercial interruptions, is so over. It seemed as if there was only 22 minutes of show crammed into Thursday’s expanded 60 minute timeslot. There were moments when the ads for Toy Story 4 were more compelling than the series.

In some ways it helped Thursday’s finale, in that there was no room or temptation to cram in every guest star who ever appeared over the years, the way they tried to do on that last, super-boring episode of Seinfeld (although there was time for former Buffy the Vampire Slayer star Sarah Michelle Gellar to sneak in as the sitcom’s last celebrity guest star).

On the other hand, the big scene at the end where Sheldon grows up came together a little too quickly, spoiling some of the emotional punch. It made me wonder: if that final episode of Newhart was airing in today’s commercial-crammed world of broadcast television, I doubt there’d even be time for Emily to get back in bed with Bob. 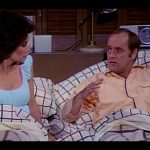 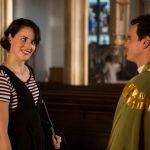 Prayers answered with the return of Fleabag on Amazon Prime Video