Hey Canada –think you or somebody you know is Tough as Nails?

With the fifth season of the reality competition series Tough as Nails heading into production this summer, Canadians, for the first time, have an opportunity to put their helmets on and prove that we’re stand on guard for thee ready.

Co-creator/host Phil Keoghan was in Toronto Monday at Global’s Corus Entertainment headquarters to help promote the new Canadian application process. The series originates, of course, in the US on CBS. Applicants, male and female, have to produce a short video (find tips here) as well as fill out an application. You can find the CBS Casting form here.

One of the questions on the form asks applicants to describe themselves in one word. “I told Keoghan that, as a freelance journalist, the word that came to me first is “adaptable.” (Well, okay, “lazy” came first but then adaptable.)

“That’s good,” he said, sensing a quality that would help somebody compete on Tough as Nails. The series strives to define toughness as more than just brawn and brute strength, with only about ten per cent of the challenges being “power based.”

“Growing up as a kid, I remember my dad would say, to me, ‘You’ve got to pull your own weight,'” he said. It’s a philosophy that extends today to Tough as Nails, where toughness is measured on a “pound for pound” level.

Keoghan says the word he might pick for himself is tenacious. Despite two decades of worldwide success with The Amazing Race, the 54-year-old, who developed the idea with his wife Louise Rodrigues, says it took ten years to sell CBS on his vision for Tough as Nails.

“There are plenty of shows that love to celebrate the worst in the human spirit,” he says. Tough as Nails is more about lifting people up and celebrating the best of who they are, both as individuals and as team players. “I would dare anybody to watch, say, the final episode of season three with [eventual champion and Jill-of-all-trades Lia Mort] racing in the final gauntlet and not have a tear in their eye.”

Keoghan is no stranger to Canada. As a youngster, he lived in Guelph, Ontario. His family moved here when his dad, an agronomist from New Zealand, worked at the University of Guelph for several years. Keoghan figures he was between three and six years of age or so and has warm memories of Canada, and still has the rugby trophy his dad — who coached the Guelph Gryphons Rugby team — won for the school.

“I was a landed Canadian immigrant until I went through immigration in Calgary back in the 90s,” he said. Seems an immigration official took one look at Keoghan’s old immigration card, “and tore it up in front of me.” That was a drag, says Keoghan, who calculates that, especially after hosting so many seasons of The Amazing Race, he’s been to 130 different countries. “I don’t know how I would ever get my status back, but I was kind of proud of being a landed Canadian immigrant.”

Look for more from Keoghan, including his thoughts on how the people of Ukraine are re-defining what it means to be tough as nails, in an upcoming episode of brioux.tv: the podcast. 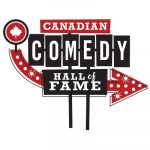 Canadian Comedy Hall of Fame: an idea decades in the making 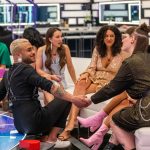