Probably the only time you ever wish you were a bit older is when you are in Grade Seven. That’s where I was in 1969. That summer, Crosby, Stills, Nash & Young played their second-ever gig — at Woodstock.

I was not at Woodstock. I was in Etobicoke.

At Our Lady of Peace elementary school to be precise. Mr. O’Hanley was an innovator, happy to ditch curriculum to take a current events detour or three. Rock albums were studied and everybody was scouring Beatle covers to prove that Paul McCartney was dead.

That first Crosby, Stills & Nash album had us all guessing who the face was in the window of that old house on the back cover. The music and especially the harmonies were sweet and accessible ever for younger kids who looked up to their hippie brothers and sisters — or even up to the long-haired kids in Grade Eight. Even fearsome principal Sister Martha Ann had to like a song titled “Teach Your Children” (on CSN&Y’s next album, “Deja Vu”) even if the band looked like they needed a good scrubbing and an exorcism.

Many years later, Crosby made an appearance at a Television Critics Association press tour. He did not perform, but rather was part of a panel discussion. I wish I could remember why he was there. In more recent years he has been one of the key subjects of several excellent rock documentaries, including “Laurel Canyon: A Place in Time” (2020) and “David Crosby: Remember My Name” (2019). He seemed to be profiled on CBS Sunday Morning at least four times a year.

This TCA event, however, was at least 20 years ago. At the time, music videos were being posted on YouTube days after big events had emerged, and I asked Crosby if the technology had caught up with what Crosby, Stills, Nash & Young famously did in 1970 when they wrote and recorded “Ohio.” That slashing, wide-awake song of protest was in record stores days after four Kent State university students were gunned down by national guardsmen.

Crosby shot me an ice-y stare and as much as told me to eff off. I knew Neil Young had written the song, but Crosby championed it. Whatever nerve I touched remains a mystery. I wasn’t the first to get the hairy eyeball from Crosby and I wouldn’t be the last.

Crosby was the guy who flashed the most prickly peace sign. That made him interesting. To have such lyrical sensitivity, such soul in the harmonies, and yet be that pissed off at the world.

When he wasn’t stoned back then he always seemed so very present. Check out this amazing early performance by all four band members on This Is Tom Jones. Crosby is just delighted as Jones’ kills it, throwing himself vocally into “Long Time Gone.”

His death at 81 was not unexpected — even by him. He’d been on everything but rollerskates, went through a kidney or two. Late in life he roared through five new albums and still had that voice. Paul McCartney had to be jealous.

“David and I butted heads a lot over time, but they were mostly glancing blows, yet still left us numb skulls. … I am deeply saddened at his passing and shall miss him beyond measure.” 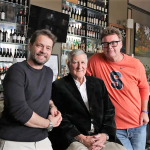 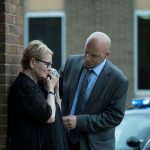