Deadline Hollywood Daily’s Nikke Finke broke the new yesterday that Tori Spelling does not have a deal to join the new 90210. As Nikki herself would say, “Toldya!”

Back on July 13, I reported here that I had spotted Spelling and her Canadian-born hubby Dean McDermott at the Hollywood Collectors and Celebrities Show in Burbank, Calif., and asked her directly if she was indeed part of the new 90210. She answered without hesitation that she was not signed and that no deal was in place. She seems quite eager, in fact, to clear that up since there were already reports at the time that she was joining the new series, which premieres Sept. 2.
When I relayed this back to the producer of 90210 at the CW press tour session one week later, there was stammers and surprise. From the TCA transcript:
QUESTION: For the producers, I was curious, what is the status of Tori Spelling on the show? I spoke to her last week and she said there was no deal, no contract, so has something happened in the intervening week or —
GABE SACHS: I haven’t heard that. I don’t think anything happened. She was exhausted from having the baby. And again, I’ve said, you know, before we were E-mailing and brainstorming on stuff, you know, on her character and I think that when she’s up for it, she’ll be in. That’s my understanding.
QUESTION: So you have a contract with her? Is she actually on the show?
GABE SACHS: Where are those people (looking in audience)? Yeah. We have a —
JEFF JUDAH: Yeah. We have a deal.

A few days later, when Spelling and McDermott made the scene at the NBC/Universal press tour party (their reality series, Tori & Dean: Inn Love, airs on Universal-owned Oxygen), the actress flatly denied she had ever said she was out of the new 90210 loop.
“What was this nonsense I heard yesterday, someone said at a press conference that I never had a contract or something?” she told a press scrum that night. “I never said that. I absolutely have a deal. They’ve been very kind to me.”
Unfortunately, I missed that scrum (the quotes were forwarded by Toronto Sun TV columnist Bill Harris, who wishes to remain anonymous). Spelling went on to say the only delay was sorting out the timing, what with her new baby and all. “The show runners have been amazing.” she said. “I’m excited to come back in the future episodes. But absolutely.”
Not any more, according to Finke:

Insiders tell me that Tori was hired to reprise her role as fashion boutique owner Donna Martin for just “$10,000-$20,000” per episode. But then Jennie Garth and Shannen Doherty were signed for “$35,000-$50,000” a show. When Tori found out her former co-stars were getting paid way more than she was, she got pissed and demanded equal pay. But the network suits have refused. So now my sources tell me that Tori has pulled out of the series… 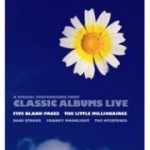 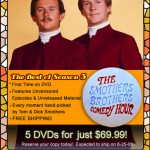 Smothers Brothers Finally Out On DVD