Here is an excerpt from a story I wrote this week for The Canadian Press:

TV critics rarely get gooey or sentimental. Something to do with having to review too many stupid summer shows involving Japanese obstacle courses, has-been celebrities in “Big Brother”-style homes or, say, another season of “Gossip Girl.”
But when the Smothers Brothers took the stage at last month’s Television Critics Association Awards in Los Angeles, it was as close to a TV love-in as you can get.
For many of us in the room, the Smothers were a reminder of why we got into the TV review business in the first place. They were the ones who first showed us that TV could be entertaining for the whole family, and still be courageous and outspoken.
They were also the ones who paid for it. As critic David Bianculli – currently writing a book about the Smothers -said while introducing them at the awards, they were never cancelled, they were fired. They were the tiger CBS had by the tail in the late ’60s, when their variety series dared to be what no other entertainment show was during that turbulent time – relevant.

You can read the full Smothers Brothers post here, except for the following few lines which got cut. (CP tends to cut anything to0 “me-me-me,” which generally I agree with, but occasionally, well, hell, I guess this is why blogs were invented. In any event, the CP story goes on to talk about the Smothers’ stand against the Vietnam War and the U.S. government on their late-’60s variety hour and how that cost them their TV show (although they later sued CBS for wrongful dismissal–and won millions in a settlement).
The CP story ends with the line: “Everybody has a time to stand up and that was our time,” says Tommy.
What was cut:
For me, as a viewer, it was a time to stay up; as a 10, 11-year-old, seeing the Smothers on a Sunday night meant extending bedtime for an hour beyond “The Ed Sullivan Show.” But even as a kid I knew something special was happening, something captured like a time capsule on this DVD box set. “It was an event,” agreed Tommy, “because something could be said that wasn’t being said. And that was cool.”
The DVD comes out at the end of the month but Time/Life are taking pre-orders now. You can order it here and thank me later.
Both Tom and Dick stayed long past last month’s TCA Awards and shared many stories about the bad old days, including Tommy’s account of that infamous John & Yoko bed-in in Montreal in 1969 where he would up singing and playing on “Give Peace A Chance.” More on that in an upcoming post. 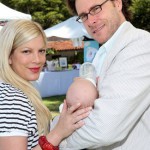 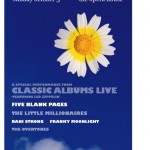