By all accounts it was a grim if orderly announcement over the noon hour today from Hubert Lacroix on the future of the CBC. Wearing a jacket but no tie (or barrel), the network president told staffers across the country via closed circuit TV that up to 800 layoffs are pending over the next few months. “This is bad news, can’t sugar coat,” Lacroix told staffers, “but we can’t afford to get lost in it.” He admitted what was pretty much a foregone conclusion, that CBC failed to convince the Harper government to pony up with an advance on appropriations.
CBC is mired in the same dramatic downturn as every other broadcaster in North America. I keep coming back to Tina Fey’s quip from last July’s TCA Awards: “Being in network television today is like being in vaudeville in the ‘60s.”
Like bad vaudeville, the poorly lit CBC presidential address looked and sounded like if was set up by Stephane Dion’s old camera crew. Attempts to take phone calls from across the country resulted in terrible feedback. When you run a network, look like you run a network. Deliver decent pictures and sound, especially to your own demoralized troops. NBC gets this, and Fox and CBS. Don’t lead with amateur hour optics, especially when you’re delivering bad news. You look like you wouldn’t know what to do with money if it arrived on a cushion.
Lacroix says he needs $171 million to balance the CBC operating budget, which translates into 800 positions. This is after an asset sale which still has to be approved by parliament.
The cuts break down to 383 jobs eliminated for English language TV and radio (with 83% of that TV), 336 in French radio and TV and 80 jobs from corporate. The door opens to package options April 6, with layoff notices appearing by mid-May. Department heads have been told to start cutting. Bonuses for 553 senior managers will be cut back by $4 million…wait a minute…THERE ARE 553 SENIOR CBC MANAGERS??? AND THEY GET BONUSES?????? WTF???!!!
English TV boss Richard Stursberg said no regional stations will be closed. Stursberg also said he doesn’t want to introduce any ads on CBC Radio One or Two, which is a pretty safe boast, since NOBODY IS BUYING ADS, WHICH IS PARTLY WHY CBC IS IN THIS MESS.
The only department not touched–in fact, it gets a budget increase, is CBC.ca. Hey, there is a reason it is called New Media.
The CP report on all of this can be found here.
For some grim perspective on the meltdown in network television, Fagstein calculates one journalist in six have now lost their job in Canada, with the tally nearing the 2300 job mark. 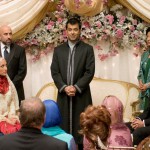 Mosque, Sophie Down Year to Year