How much did Channel Zero pay for the acquisition of Canwest’s Hamilton E! station, CHCH? Well, with other stations in Canada being shopped around for a dollar these days, the guess is that Channel Zero got a bargain that pretty much lived up to their name.
The purchase still needs to be approved by the CRTC and union concessions for the 100-plus employees are being sought. But the new guys have a plan and the plan is to go local and go home.
Will that work and perhaps even provide a blueprint for other broadcasters to fix their broken business model? Focusing on local news would seem to make CHCH eligible to dip into that $100 million-plus CRTC Local Programming Initiative fund. Branding it as an all-news station also plays to the station’s ratings strength. News numbers were up spring to spring says news director Mike Katrycz, with the supper hour newscast up 30%. The Morning Show is the second most popular morning broadcast in the GTA (behind only Citytv’s long time front-runner Breakfast Television). Katrycz says the station is averaging 1.5 million viewers for its local programming, up from last year and way up over all the E! crap it paid too much to export from L.A. Seems CHCH viewers would rather tune in to a show about Kitchener than Kimora.
Read more about it here in the story I filed today for The Canadian Press. 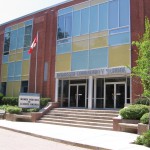