Spoke Tuesday in Toronto with Kelly Blatz (right), who stars Friday in the shot-in-Toronto Disney XD sci-fi TV-movie Skyrunner (premiering Friday Nov. 27 at 7:30 p.m. on Family Channel).
The 22-year-old Burbank, Calif.-native is a fan of T.O., having spent much of the past couple of years here shooting Skyrunners as well as the Disney adventure series Aaron Stone.
Blatz is full of beans, very friendly and energetic. Gotta love a kid in his twenties who fronts a band called Capra (named after director Frank Capra, the great filmmaker behind Mr. Smith Goes to Washington, It’s a Wonderful Life and countless others).
Blatz says he’s stoked to be a part of the Disney tradition, picks The Lion King, Aladdin and The Jungle Book as the three Disney animated classics he likes best. “Everybody thinks of Disney as this huge corporation, but it really is a big part of everybody’s lives, especially when you’re a child,” he says.
Disney is looking to Blatz to help define their new U.S. cable brand Disney XD, aimed squarely at young dudes generally attached to X-boxes for too long at a time. He’s already wrapped two seasons in Toronto on Aaron Stone, one of those Family Channel shows busting up the new PPM ratings this season. Read more about Blatz and Skyrunner at my Canadian Press story posted here.

This Week’s Podcast: Passport to The Pacific 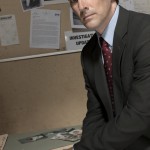 Are Those PPMs Losing Some Lift?