Call me a schmaltzy old rink rat, but this is moving on so many levels. Michael J. Fox–not Terry Fox as NBC mis-identified him earlier these Games–playing shinny as Team Canada’s greatest goals are celebrated. Featured on CTV’s Olympic broadcast earlier this week, you can bet it will be re-broadcast right before or during the Gold medal final between Canada and the U.S. Sunday (3 p.m. ET on both CTV and NBC).
CTV Olympic host Brian Williams explained to viewers that it was shot in Pat LaFontaine’s back yard out in Long Island, N.Y. Pretty cool when your yard backs out to the Atlantic Ocean. Apparently they had to lower an American flag and put up a Maple Leaf for the shoot. Bit ironic that such a Canadian moment be filmed in the U.S., at the home of one of the greatest American-born NHLers.
Fact is–despite his appearance on that overplayed B.C. tourism ad–Long Island is near where Fox lives. At 48 (that “61” on his sweater reps the year he was born), he’s been an American citizen for years. So really he’s the perfect guy to set all this up and also to remind us that which ever nation wins Sunday, it’s just a game. The victory for Fox is being able to lace up a pair of CCM Tacks, flip a puck on the ice and pick a corner, tremors be damned. Go Canada, and donate to Parkinson’s research at the Michael J. Fox Foundation here.

Talk About “Sharing The Podium” 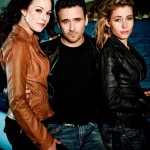