Shhh–while everybody was busy watching the gold medals pile up and getting ready for Sunday’s sure to be record-breaking hockey tilt, CBC quietly renewed Republic of Doyle and canceled The Border.
Etan Vlessing, who always has these things first, broke the news Friday in the Hollywood Reporter.
Allan Hawco’s retro-ish detective romp Republic of Doyle broke big in January, nudging a million viewers then settled in around 700,000 a week. With scripted drama seemingly beyond the PPM lift (aside from the family drama Heartland), that’s a solid CBC number this season, especially in a very competitive tineslot. Doyle has not only Wednesday’s American Idol to content with, but often has to compete with strong regional hockey competition. After the Olympic hiatus, it returns this Wednesday with a new episode, again featuring guest star Nicolas Campbell.
The Border was thrown into a suicide slot in its third season and got overrun by CTV powerhouse Grey’s Anatomy. Unlike Doyle, which enjoyed the public network’s strongest lead-in (Dragon’s Den), The Border got squat from Doc Zone. The finale drew a little over a half million viewers with some weeks dipping closer to 400,000.
Doyle also gets a ton of cash from Newfoundland outpatient Danny Williams, over $3 million in Season One. Much of that went to building a kick-ass studio on The Rock. The series is lively and fun and earned a shot at a second season, but there were many reasons to expect it would go forward. The Border did not have any of that momentum.
Compounding matters was that CBC had a strong fall, thanks mainly to reality fare like Battle of the Blades and Dragon’s Den. It was fairly obvious that CBC marketing and promotional dollars were not getting thrown The Border‘s way this season. As I wrote back in December at the CBC’s Winter Launch, “there was a clip of The Border in the CBC reel shown at the event, but I blinked and missed it. As endorsements go, it was right up there with Stephane Dion backing Michael Ignatieff.”
The third season is sink or swim time for a series on the bubble, and despite some international sales, The Border’s bubble burst.
The series did showcase a strong cast, with James McGowan emerging as a strong series lead. Hopefully we’ll see him flanking Jack Bauer soon.
Vlessing also reports that the Doyle pickup scuttles development on Tangled, a one-hour action hour from Shaftesbury Films. 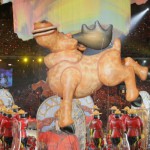