David Letterman gave Michael Douglas a big hug on television Tuesday night and by God he needs one. The star of the upcoming Wall Street sequel Money Never Sleeps revealed to Letterman on CBS’s Late Show that he is battling Stage Four throat cancer and that he has already begun chemotherapy and radiation treatment. The very candid interview was typical Dave, playing dumb enough to get the whole story out of Douglas, who says his doctors have given him good odds on a recovery. 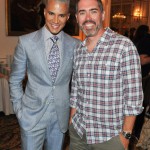