Brian Linehan would have liked this morning’s simple but sincere Toronto International Film Festival salute. The celebrated celebrity interviewer, who died in 2004, was honored at the dedication of the Brian Linehan Research Library, tucked onto the fourth floor of the brand new Bell Lightbox. TIFF’s new showcase is a perfect spot for Linehan’s papers and collection of reference books. The Hamilton native was famous for being completely prepared before every interview. Years before the Internet, he carried a Wiki and more in his head on virtually everybody of note in the film biz.
Filmmaker Norman Jewison said later that pals in Hollywood would call up after a typical Linehan confession and ask if he knew any way to get the tapes back. Linehan had a way of getting big stars to spill more beans than they’d normally spill to their shrinks.
Jewison also joked that Linehan also would have approved of the champagne toast so early in the day. Linehan had champagne tastes. He’d often counsel this fellow journalist to only accept first class travel accommodations while on assignment. His biographer, George Anthony, a former Toronto Sun entertainment editor, suggested he and Brian enjoyed a perk or two back in the day that seems a million miles from today’s austere press scene.
He’d probably disapprove of this blog post being filed off a free WiFi connection at a mid-town Toronto Starbucks–although, damn, imagine the scorcher of a blog Linehan would have been cranking out today.

Entertainment lawyer and producer Michael Levine (left), a confident and executor of Linehan’s surprisingly robust estate, spoke eloquently at the private dedication, as did Festival co-director Piers Handling. CFC executive director Slawko Klymkiw also was part of the gathering, as was Canada AM co-host Seamus O’Regan.
The white walls of the room feature several photos of Linehan with celebrities, including an impossibly  young Kiefer Sutherland. Missing is a dinner table; Linehan was the ultimate dinner guest, the guy you wanted to sit next to for all the latest.
Missing also was a portrait of fellow Hamiltonian Martin Short as Brock Linehan. Short’s SCTV send-up was hilarious, but probably a bit too close to the bone.
Linehan might be amazed today to see how much he is missed. Mention his name to Joan Rivers and she touches her heart and gets all verklempt. Always a kick were his dishy phone messages. Today he would have left word that Sept. 13 is the birth date of J.B. Priestley, and he is never to be confused with Jason Priestley. He’d then tell a story about both. That was Brian. 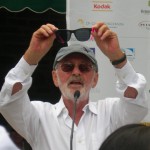