Drew Carey isn’t half the man he ised to be. The once rolly-poly comedian has shed close to 90lbs as regular viewers of The Price is Right can attest. Carey dropped so much weight by the press tour last August that many reporters walked right by him at the CBS evening event. In his tan suit and bow tie, he looked more like Bill Nye the Science Guy.
I spoke with Carey and got the scoop on his weight loss, which he achieved (with the help of a trainer) over the past year through a combination of diet and exercise. Read more of that interview here in this story I wrote last week for The Canadian Press.
Carey is one of the good guys when it comes to press tour, always showing up over the years (even to promote that WB “Green Screen” series he had for about two weeks several years ago. The guy even dyed his hair green for that). He always has very positive things to say about Canadian funnyman Colin Mochrie, who was one of the standouts on Carey’s ABC improv series Whose Line is it Anyway.
He’ll also talk your ear off about soccer. Carey was just back from the World Cup when I ran into him last press tour. He is an accredited photographer for soccer events. John Doyle, send him a book.
Good to see him take a turn, at 52, toward a healthier lifestyle–an inspiration to TV critics everywhere. 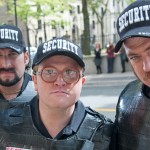 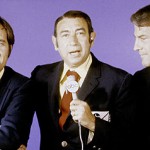 Don Meredith: Turn out the lights, the party’s over