Is Seth MacFarlane doing it for ya?
While he’ll be funnier than James Franco, I have to say the choice of MacFarlane is putting almost a full stop on my interest in Sunday’s 85th Annual Academy Awards.
I can see where the Academy is going with this. Invite the inmates to take over the asylum. It worked for The Golden Globes with naughty Brit Ricky Gervais at the podium. Ramp up the live and dangerous to woo the kids back. Russell Peters gave The Junos both an edge and a lift.
Except MacFarlane is neither of those two guys. He’s funny, and talented, but not a stand-up. If he starts doing what he does best, Stewie or Peter Griffin’s voices from Family Guy, half the Academy will go, “Huh?”
He’s also got a smug veneer that may be hard for some viewers to get past. Then there’s the threat by the Academy that he’s going to sing and dance at the end of the night. Do the words Rob Lowe and Snow White not mean anything people?
Besides, younger viewers will be glued to The Walking Dead anyway. A zombie host wouldn’t have helped.

The Best Picture nominees will give MacFarlane something to work with: Lincoln, Life of Pi, Les Miserables, Django Unchained, Argo…you can see the opening film montage now.
But it would be even funnier with another Seth, Rogan, as host. (He once did the Independent Spirit Awards, and was damn funny.)
An even better choice is right under ABC’s nose: Jimmy Kimmel. He already pulls half of Hollywood into his hilarious viral videos. He’d be the perfect Oscar host in that his monologue delivery is so dry and casual the stuff that stings would sail right over the heads of the Academy codgers and straight into the college-age demo ABC so desperately wants to bring into the tent.
Instead, Kimmel fans have to stay up late for his eighth annual post-Oscar show, which will be great but at 12:05 ET way past my bed time. Next year, ABC should hire Jimmy to do the big room and ask Seth to stick around for the midnight brattiness. Now that’s a one-two that would kill. 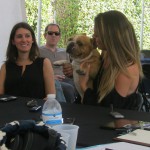 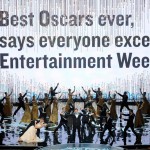 Seth MacFarlane: I want my four hours back