As someone said on Twitter this morning, hosting the Oscars must be the only job in the world where people in pyjamas eating all dressed chips can sit there and say they could do it better.
Seth MacFarlane had his moments, and seemed to get better the deeper things went into the night, but he wasn’t the right guy for this gig. He wasn’t helped by the rest of the production, which was bland and, at times, bizarre. The producers promised at least one “wow” moment per segment but they were more like “ow” moments. Here’s my take:

MacFarlane doesn’t have the comedy chops to walk straight out into a cold opening. Bob Hope, Johnny Carson, Billy Crystal, those guys could all win over a room just by entering it. MacFarlane could do this in a room full of TV critics or fellow executive producers but not at the Oscars. Jimmy Fallon–a far more winning personality–won over the room with a terrific opening filmed montage at the Emmys a few years ago. He killed it before the monologue. MacFarlane should have had his fun with Argo and Lincoln and the stars before he took the stage. Points for guts, but you only get that one chance to make a first impression.
Bad move bringing up Tina Fey and Amy Poehler. As soon as Shartner suggested they’d be better hosts, every head in the theatre and at home nodded “Yes.” Those two are seasoned comedy performers and killed it at the Emmys. If you’re MacFarlane, even if you’re trying to win people over by being self deprecating, you should only go there if you yourself are already having a pretty good night.

He should have kept hitting the nerve once he found it. Picking on Tommy Lee Jones for that first live joke was smart. A seasoned stand-up (or smart showrunners and on-the-ball writers) would have known to keep going to that well. Jones could have been MacFarlane’s Jack Palance. Billy Crystal milked Palance and his one armed push ups for at least three more Oscar telecasts. Jones should have come on stage an hour into the show and tasered Seth. Clint Eastwood should have asked him if he felt lucky, punk, before hitting him across the back with an empty chair. Huge laffs. Comedy gold. MacFarlane, who hadn’t earned his way in, needed an old Hollywood initiation to be embraced by this room.

He should have mocked the producers constant need to remind folks of the movie they produced 10 years earlier, Chicago. That would have been edgy and live and dangerous and ducking it seemed kiss-ass.
He should have given the director a car. Those cutaways to bored, embarrassed celebrities killed him. Charlize Theron looked mortified in her seat as MacFarlane went into his “Boob” medley. George Clooney looked like he wanted another drink after MacFarlane tossed something at the star from the stage. A Cubs fan would have thrown it back.
He had no comedy sidemen. Where were Will Ferrell, Steve Carrell, Seth Rogan, Ben Stiller, Chris Rock, Kristen Wiig or even Robin Williams? Paul Rudd and Melissa McCarthy tried, but most of the presenters seemed an uninspired lot, like names drawn out of a not funny hat.
He should have ditched that final song and dance number. Like something out of an SCTV sketch mocking award shows. Simply too late and unnecessary. Plus all that dancing by celebrities. just made me wish Tom Bergeron was hosting the show.

Finally, MacFarlane should get credit for being true to himself and sticking to his own style of humour. Presumably that’s why he was hired. I have to state, however, that I wasn’t looking forward to his performance based on what I expected heading into the show. I’ve never been much of a Family Guy fan. I always thought the joke on The Simpsons where Homer falls into a photocopier and out spits a Peter Griffin copy was spot on. MacFarlane’s stuff is just too derivative, to in-jokey, too all about pop references and TV culture.
The Oscar night joke of having a Nazi run on stage looking for the Von Trapp family before Christopher Plummer’s introduction was exactly like the type of cutaway humour on Family Guy. I get it, it’s a reference back to a 49-year-old movie. So if you love that, you probably loved the bit.
I thought it was funny, but cutting back to MacFarlane for his reaction to his cleverness stepped on the moment for me. Steve Martin or Will Ferrell would have acted outraged or confused. MacFarlane just enjoyed his own joke.
I think MacFarlane has a keen sense of television and is an excellent impersonator. Sunday night he impersonated an Oscar host, right down to those robotic, “We’ll be right back on ABC,” commercial throws. I’d rather see Homer Simpson, not the copy. 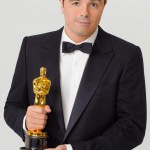 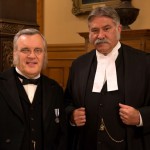 TONIGHT: a walk in Queen’s Park with the Honourable David Onley on Murdoch Mysteries