Yesterday marked the 40th anniversary of The Young and the Restless. The daytime serial began on March 26, 1973–way back when President Richard Nixon was still in office. His successor, Gerald Ford, had a reason to watch for a while–his son, Doug, was a regular on the series.
Now real life soap operas–like the one I read about every day in The Star starring Toronto mayor Rob Ford–have replaced a lot of the scripted soap operas on television. Starting with The Osbournes and extending into the Kardashians and Honey Boo-Boo’s clan, shows about (more or less) real people have shoved soaps aside. Who cares about made up stuff on Genoa City when watching real people make fools of themselves is so accessible?
The soap and reality worlds collide these days on series such as Dancing With the Stars, where soap actors are often part of the mix. (General Hospital‘s Ingo Rademacher is on the current edition). Their loyal fans usually make sure they enjoy a long run on the ABC dance series.

I was asked to weigh in on all this Tuesday on Global’s News Hour. Global has had the Y&R on its schedule dating back to shortly after the network went on the air. The series continues to be one of their top draws, pulling 747,000 overnight viewers a week ago Tuesday. It easily won its timeslot that day, beating CTV’s Dr. Phil at 3 p.m. (521,000), Ellen DeGeneres at 4 (437,000) and Anderson Cooper at 5 (332,000).
The Y&R has been on a truly remarkable, 25-year winning streak as TV’s No. 1 soap. It didn’t just win every year, it won every week, some 1200 weeks in a row in the U.S. Reaching back to the three network days, it continues to make money for CBS against 500 channels, cable and Netflix and countless other distractions.
Some modern viewing methods actually help keep Y&R on the air. While overnight numbers aren’t what they used to be, viewers today can PVR their daily soap fix and watch it later. Tweeting and Facebook posts help keep fans connected in a way that was once only possible through mall shows and other live events.
Unlike other soaps, the series isn’t going away anytime soon. CBS just renewed Y&R–along with the rest of its daytime lineup–for the 2013-14 season.
I’ve interviewed a few of the Y&R stars over the years. Peter Bergman, with the series for 30 years as Jack Abbott, was one of the CBS personalities who took part in a press conference at CBS Television City Studios last year (where Y&R and The Bold and the Beautiful are taped). You can read his comments here.
The big man for most of the run has been Eric Braeden. He joined the series in 1980 as iconic villain Victor Newman. Victor married Nikki (Melody Thomas Scott) again last week for the umpteenth time. I’m thinkin’ it won’t be happily ever after.
Now in his 70s, Braeden is still an arresting presence on the show. He’s also a fun interview and will talk boxing for hours; he’s a big fan of George Chuvalo, the former Canadian heavyweight champion honoured Tuesday with the Keys to Toronto. Read this interview I had with Eric Braeden a few years ago here. 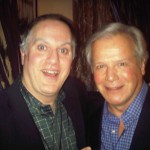