I’ll throw this one out there to anyone who wants to challenge it: Steve Smith says The Red Green Show is the “longest running Canadian show in America ever.” The humble little Canadian comedy, which began airing Stateside on various PBS stations in 1993, it still being carried on around 40 affiliates according to Smith. That’s 20 years and counting.
That it lasted for 15 years in Canada is all due to one man’s resourcefulness, determination and spunk. Smith took the series from CHCH to Global to Comedy and eventually to CBC. This series cost less and traveled more often than Pamela Wallin.
Despite living in semi-retirement with wife Morag, Smith is set to put on the suspenders, plaid shirt and cap and take his act back on the road. Smith’s “Red Green: How to do Everything” tour begins Sept. 13 and 14 in St. Catherine’s, Ont. (with all of those proceeds going to Ronald McDonald House) and then runs clear across Canada, finishing up in Pictou, N.S., Nov. 2. There are plenty of shows out west and even a stop at Ontario’s Casino Rama Oct. 26. See the full live comedy tour schedule here.

I spoke with Steve last week (he was on his boat, and believe me, its not held together with duct tape). We’ve been yakking back and forth for over 25 years, ever since I did a TV Guide feature for for one of his previous series, The Comedy Mill. That little gem probably cost less than today’s average web series.
Smith also has a new book out: “Red Green’s Beginner’s Guide to Women (For Men Who Don’t Read Instructions).” It’s from Doubleday Canada; Smith was out golfing with an editor from the publishing company a few years ago who urged him to write some Red Green books. Not sure who won the golf game but this is the third tome so far.
Steve cleverly diminishes expectations for anyone seeking sound advice from the book right from the introduction:

In many ways, difficult human relationships are like diarrhea–it’s important for you to be the first one to realize you have a problem.

I kidded Steve about the terrible illustrations in the book. Calling them stick figures would be an insult to sticks.
Says Smith: “You should have seen the rough drafts.”
The hardcover lists for $29.95 and, yes, it’s cheaper in America.
For more on the book and the tour read this story I wrote this week for The Canadian Press. 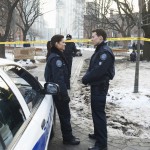 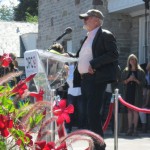